“The best laid plans of mice and men gang aft aglay,” Rabbie Burns must have had a premonition about the Giro when he wrote that. It should have been a short hop over the Pordoi Pass from the digs to the start at Arabba on this stage to Marmolada. The jobsworth policeman at the top of the Pordoi settled our hash though; “No, you stop now, road closed, no journalists, only team cars!“:  Aye, cheers pal, you’ll soon get that job you want in the riot squad, bludgeoning students. Sorry…, I was ranting, wasn’t I?

We had to turn the little Matiz around and head back down the Pordoi to take route B to Arabba, via three alternative mountain passes.

We would have managed the whole route if our pal at the Pordoi hadn’t stopped us and caused us to drop that time, but we got stopped again with five to go on the Marmalada – we set off to walk the last to the top, but there just wasn’t enough time.

It’s like that addage your old journeyman used to quote; “An hour in the morning is worth two in the afternoon!”

The scenery in the Dolomites is – to use an over worked word – stunning.

Everywhere you look there are mountains and rock formations of such diverse shapes and colours that you can only stare in wonder.

Apparently the Dolomites were ancient coral reefs, thrust high, way back in time and leaving the ‘saw tooth’ profiles which now leave you gasping.

There perhaps aren’t as many fans out as one might expect, but there are still healthy crowds on the finish climbs.

I said the minute I heard that ‘Bert’ (as team mechanic and VeloVeritas pal Alan Buttler calls him) was riding, that he’d win – there’s no one will drop him by a significant margin on the climbs and he can time trial with the best.

I’d like an Italian winner, Di Luca, Riccò or preferably Simoni – he’s so eccentric – but I honestly can’t see ‘Bert’ losing it now.

Kloden folded today, I think the German could still win the Tour one day, but he hasn’t many chances left. He’s still super classy – not today though. Andreas’s bad day is more good news for ‘Bert’ – there’s no conflict of interests now.

Over the last few days we’ve become big Bruseghin fans, he’s such a ‘bear’ and his fans are all deranged. The donkey is his mascot, his fans have posters and pictures of the long eared, stubborn critters everywhere.

I dare say we’ll have ‘Bruz’ hats, complete with donkey ears, by the time we go home.

Another party piece from his fans is the “donkey cry” air horn – wonderful!

We think that Bruz’s fans would even make it to the top echelon of demented fans in the world centre for crazed supporters – Flanders.

It’s 8.36 pm and Dave has just taken us over the summit of the Marmolada en route our hotel.

We didn’t see this part of the route today due to the closure, but if I tell you that Dave had to take the car down to first gear at one stage, then I think you’ll get the picture on the gradients.

The scenery up here is even more awe inspiring, whole mountain sides look like melted candle wax and the huge rock domes and stumps remind me of Ansel Adam’s pictures of Yosemite National Park in the States.

The digs aren’t too far away now and I can almost smell our pizzas.

Plan de Corones tomorrow, can Sella make it three? I don’t think so, Contador is my tip. 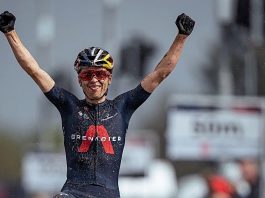 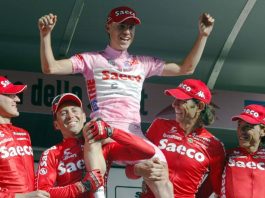 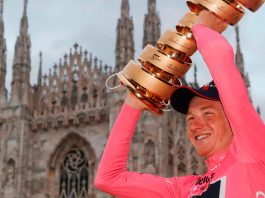 ABOUT US
Here at VeloVeritas we aim to provide our readers with truthful, accurate, unique and informative articles about the sport we love.
FOLLOW US
© VeloVeritas 2022
Go to mobile version
Loading Comments...