Hola from Comillas! “Adios Valverde” – so says the sports paper AS in response to Alejandro dropping 3′ 23″ yesterday in what should have been an innocuous transition stage – those Spanish journos aren’t shy.

Sleep came easily last night; but I was on the laptop for 07.00 to get my Angliru piece written.

Breakfast was tortilla with chorizo on rolls, washed down with café con leche – braw.

It was a “pester the mechanics’ day, today – there’s a story on Pez about it here.

The drive down to Comillas passed quickly, the mountains on the right and glimpses of glorious beaches to the left.

Davie and I have been to Comillas before, on our Spanish adventure of 2004. I remember reading about Llaneras taking silver in the Olympic points race at Athens – that was to be his swan song, but four years later, he wins the same race!

Maybe somebody told Lance about that!

There’s a Gaudi villa in Comillas, just off the main road, whilst a short distance away, glorious white, creamy breakers froth and pound up the well manicured beach – it’s a nice town.

We were lucky because Comillas was the closest town to us where teams were staying for the rest day and it was all the important squads. CSC with Sastre; Astana with Contador and Leipheimer; Euskaltel with gold jerseyed Martinez and Caisse with ex-contender, Alejandro ‘Adios’ Valverde.

It still involved a 100 mile plus journey each way, but what else do you do on a rest day?

Astana were first up, usually my amigo, Alan Buttler is cranking the spanners, but he did the Germany and Eneco Tours, so he’s in Nottingham just now.

The gossip is that Levi wants to win and ‘Bert’ is supposedly a tad upset about that. He’s also alleged to be upset about a certain gentleman announcing his comeback during the Spaniards home race, thus grabbing much of the limelight which rightfully belongs to the Vuelta.

And word is that he’s trebly upset because Bruyneel has reputedly been less than honest about declaring his dealings with the man from Plano – all great stuff! 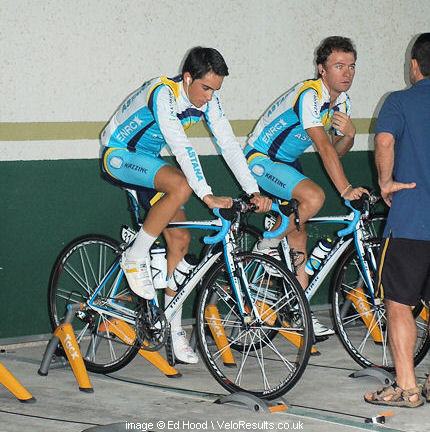 Bert was on the turbo when we got there, down in the hotel garage, I managed to beg my way in for a pic or two. Levi was nowhere to be seen.

Bert reappeared later, looking relaxed and smiling broadly, shaking hands all round before zooming off for lunch with his wife, in a Merc 4×4.

If I was a betting man, I’d put my euros on Bert in ‘oro’ by this time tomorrow.

Al Hamilton’s amigo, Chris at Astana was ok with us, but not really chatty.

Over at CSC, their mechanic, Tony was a much better prospect for a man with copy to file – he blethered away fine with us.

The squad were on their turbos under an awning, to dodge the frequent showers, which whip in off the Bay of Biscay.

JJ Haedo, the Argentinean sprinter, will really be looking forward to the Angliru.

Both squads were the centre of attention – not mobbed, but with a steady stream of fans, friends and journos.

Meanwhile, round at Euskaltel – current home of the oro jersey – there was not a soul to bug the mechanics; just us.

It looked like it was going to be a bit dour, but Tomas (above, right) spoke decent English and once he saw we were not going to ask overly dumb questions, then things were cool.

Finally we ambled round to Caisse D’Epargne, it was a bit ‘flat’ round there – I wonder why?

The local sidreria provided patatas bravas for a late lunch then Davie drove us back to Oviedo through the showers.

I sent my copy off the BlackBerry from the car, but had to edit and send my pics from the hotel, where the wi-fi was acting up; Davie says he’s never seen me so angry – oops!

By the time I finished the pics and we had a bite to eat, it was bed time.

It’s 08.00 Saturday as I finish writing this, we’re in a café at the foot of the Angliru but must dash – it’s only ten hours ’til the race gets here!

We’re so lucky with televised cycling in 2012. I returned from my 500 metre run back from the Dalriada Bar on Joppa sea front on the ‘fixie’ – having easily distanced Marlene on her Giant shopper – and there was the Vuelta TTT around Pamplona repeated on Eurosport. Perfect.
Diaries

The weather was glorious on Sunday morning in Oviedo. After liberating the car from the car park - at huge expense - we were off, and stumbled right onto race route. The direction arrows made life very easy as we followed the whole 100 mile parcours. Race route ran through El Padrun, a tiny hill top village, in fact it was the first classified climb of the day. Four years ago, Davie and I stumbled upon El Padrun whilst searching for the Angliru.
The VeloVeritas Years

VeloVeritas's soothsayer Viktor would say; 'It's just a big hill!' But if you've ever been up at the Lagos de Covadonga then you'll know there's much more to it than that. High on the bleak moor which is skirted by the parcours, back in the year 722 AD the Asturian King, Pelagius defeated the hitherto invulnerable Moors (Arabs we'd call them now) who ruled Spain at that time at the Battle of Covadonga.
Race Reviews

There was the chance that the break would stick; but with John Degenkolb’s Giant boys working themselves into the tar for him – and having done their homework by riding the stage finale on the rest day – and the likes of Ferrari and Matthews fancying their chances now that Bouhanni is back in France, not to mention Sky piling it on to keep Froome out of trouble, it was odds on to be a sprint finish.
Race Reviews

Alessandro Valverde was hugely impressive – not the shadow of himself we saw in the last week of the Tour. It’s like Robert Millar said; ‘there comes a day when you have to stop dreaming.’ That day was yesterday for many as we were reminded of the savagery of professional bike racing at the highest levels. There were no interlopers – just the best of the best, all of the pre-race favourites trying their best to waste each other on that horrible grind to the line.
Race Reviews

We’ve all had them, those days when the pedals just turn and the sensations are good – Antonio Piedra (Caja Rural & Spain) had one, today in the stage from La Robla.

Christina Murray, a lieutenant colonel in the British Army, goes for the Land's End to John o’ Groats record tomorrow, Sunday 13th September. We found out more about the attempt on the eve of the adventure.
Interviews

Dreams can come true. Ask Highlander Kyle Gordon. When we spoke to him last December, he'd turned in some nifty performances on the track over the winter - his dream was to make it to The Games. And he did...
Interviews

VeloVeritas didn’t make it to the recent Drummond Trophy, for which we offer our apologies to Mr, Norrie Drummond, one of the sport’s staunchest supporters and a former competitor himself – you can read of his Flemish exploits ‘back in the day'. It would be rude of us to let ‘The Drummond’ pass without a mention, so with the aid of ex-Cervelo and Raleigh professional, not to mention friend of VV, Dan Fleeman we got in touch with the 2014 Drummond’s winner – English professional Dave Clarke (KTM Cycling Team).
Editorial

Let’s start with the price of wheels; £3,300 for a pair of Lightweights – as Woody Allen might say; ‘what ! are you crazee ?’ Men are winning kermises every day in Belgium on thousand euro bikes; if you’re a Grand Tour rider looking for every advantage on some horrible mountain stage – yes. If you’re riding Ingliston criteriums – NO!
Nuggets

I'll be glad to get to the Berlin Six Day 2011 and enter my six day bubble - these last couple of weeks have affected me badly. I love the sport, all of it fascinates me, road, track, cyclo-cross; I'd get into mountain biking but I have to stop the reading, interviewing and writing, somewhere. Lance, Floyd, Alberto, Trent, Matt - and now, Graeme.
Interviews

Scottish professional bike riders are a bit thin on the ground so when we heard that 20 year-old Fifer, Joe Nally - who’s the youngest man ever to win the British Elite Points Race Championship - had signed with Vitus Pro Cycling for 2020 we thought we best ‘have a word.’ We caught up with Joe recently at his training base in Tenerife where he was on a two week block of base rides.