Hamish Haynes is one of British cycling’s ‘forgotten men.’ Whilst Cycling Weekly tells us about the successes of the U23 Academy riders in Italy, ex-British Elite Champion Hamish just gets on with the job, competing against some of the best riders in Belgium week in and week out.

His recent win in the prestigous Reningelst event went unrecorded. Pete Slater at SIS has been helping Hamish with nutrition this year – no ‘freebees’ though, even Daniel Bennati pays for his ‘Go bars’ – we thought it would be a good topic to discuss with a man who regularly pushes his body to it’s limits.

Tell us about your experiences with race foods before you ‘went SIS,’ Hamish.

“I’ve tried pretty much everything that’s on the market. There’s a lot of stuff available in Belgium that you wouldn’t get in the UK and there’s a big variation in the quality – there are some rough tasting drinks out there!

“That’s a big plus for the SIS drinks, they actually taste nice!”

What products are you using?

“Apart from the isotonic race drink, I use ‘Go bars,’ during events and as a pre-race snack. The isotonic energy ‘Go gels’ I find especially good if it’s warm – they’re very refreshing. I also like the ‘Smart gels’ – which have caffeine in them.

“The ‘Nochte’ recovery product I use the night after a race, I mix it quite thick to the consistency of yoghhurt and have it like a little pudding.”

Are you careful generally about your diet?

“Yeah, I try to only put in what’s required – you have to watch for unwanted weight gain. Having said that, I went too light last winter.”

Have you noticed a difference since you started on SIS products?

“It’s hard to quantify in terms of performance but there are practical aspects you notice right away. For example, the eloctrolyte race drink tastes very good and it’s easy to get down; there’s no sense of ‘gagging’ or being bloated with it.

“When I rode for Jartazzi the drink we used made your tummy feel swollen – things like that affect your performance in a negative way.

“Another thing I like with the electrolyte drink is that it doesn’t turn into a sticky mess if you get it on the bike – some drinks I’ve used in the past were terrible for that.”

Do the Belgians still have the “Tupperware full of pasta” ritual before races?

“If it’s a big race then they tend to be there early and they’ll have the big plastic bowl of pasta, yes.

“I have pasta too, but in the last three months or so, I’ve started to eat a bit earlier three-and-a-half to four hours before, I like to feel that I’ve digested it before the start. I’ll have a ‘Go bar’ too, one-and-a-half hours before the race.” 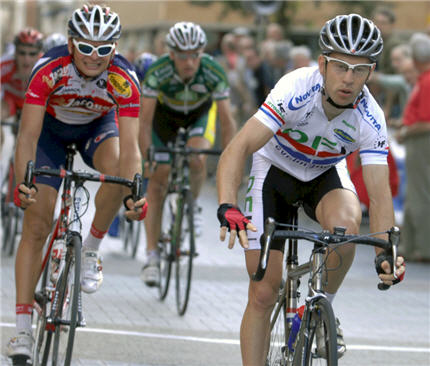 Are the Belgians ‘race nutrition aware?’

“Pretty much, none of the teams I’ve raced for have had any shortcomings that way. At Jartazzi and DFL there were a lot of Aussies and they are all well clued up.”

Do the ‘old wives tales’ still do the rounds?

“Oh, yes – take the middle out the bread rolls and just eat the crusts, in case the dough isn’t fully cooked and it swells in your stomach. I do it now, but the times I didn’t, I can’t say I noticed in difference in my performance.

“But there’s stuff like, green beans are good for you, but baked beans are bad for you!” 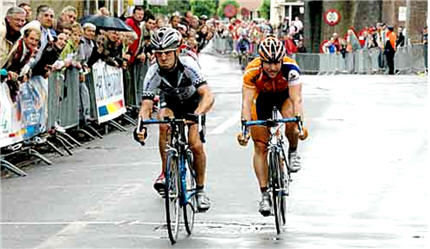 At what point in your career did you start paying more attention to diet and nutrition?

“When I first came to Belgium; prior to that I was a vegetarian for ten years – and for eight of those I was a vegan (that’s no animal products at all).

“I changed my mind for practical reasons; it didn’t want to inconvenience the team – if I was with bigger teams it may have been different – at our level I didn’t feel like I was being fair, making demands about what I wanted to eat. I also didn’t want to compromise myself nutritionaly – just ending up with a plate of rice, if that’s all there was, if you didn’t eat meat.”

“Eat plenty of fresh vegetables, that’s a good start. Always have a good breakfast, that’s an imprtant meal for a cyclist. Don’t stuff yourself, you should feel comfortable when you leave the table, not full.

“Don’t eat too late and spread your food across snacks rather than eating huge meals. Avoid fatty foods, don’t eat too much meat – fish is a good alternative.”

Do you take vitamin and mineral supplements?

“Yes, I take a general vitamin supplement and also vitamin C with zinc. I also take amino acids, which I add to my SIS recovery drink.” 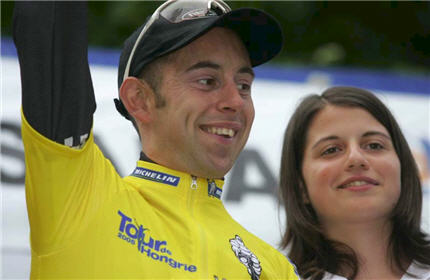 Talk us through race day food.

“Breakfast will be 500 grams or so of muesli with hot skimmed milk, that’ll be five-and-a-half to six hours before the start. Four hours or so before the race, I’ll have a plate of pasta, two thirds of a 10” plateful with a little pesto and no fat soft cheese to flavour it.

“Two hours or so before, I’ll have one-and-a-half Go bars and eat the other half just before the start. During the race I’ll have one or two bars, a couple of Go gels and Smart gels. Drink wise, I have 750 ml of isotonic drink two to three hours before the race.

“During the race, I’ll have four to six bottles of isotonic drink – three if it’s cooler. Straight after the race I’ll have my recovery drink with the amino acid added. I’ll have some ripe bananas or bread and jam and plenty of fluids.

Strange…no mention of white pudding suppers! With thanks to Hamish for his time and patience. 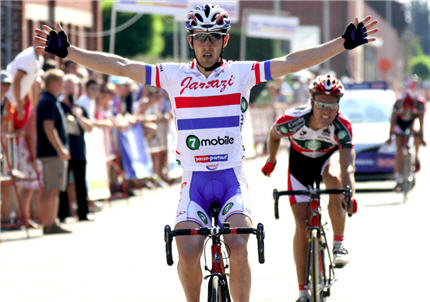 The big manufacturers always wheel out their new weaponry at the Grand Tours to catch all those eager lenses - and here's the latest TT machine from Scott, the "Plasma2"... Riccardo Riccò, the young team leader for Saunier Duval - Scott and winner of Stage 1 on Sunday, used the new bike in the opening Team Time Trial last Saturday.
Interviews

Cycle Sport magazine run an article a few months ago, ‘The 25 Most Stylish Riders of all Time’ – Giovanni Battaglin, Roger De Vlaeminck, Francesco Moser, all fair enough. But there were some glaring omissions, Tom Simpson, Ferdi Bracke, Ole Ritter and the big blond Dutchman Roy Schuiten, who in 1971 took silver in The Netherlands amateur pursuit championships. A year later it was gold and there was a third place in the amateur Grand Prix des Nations. Roy Schuiten, ace pursuiter, consummate chronoman and stylist may you rest in peace – you’ll always be one of the very coolest for us at VeloVeritas.
Diaries

Whilst we did muse over the possibility as we supped our McDonald's coffee this morning, I was unprepared for it actually happening. What I'm talking about is the setting of Alberto Contador's sun - both Quintana and Rodriguez distanced him on the very last climb of the 2013 Tour de France to Semnoz to elbow him off the podium.
Race Reviews

It's not often he gets it wrong, but he did today on the stage from Saint-Gildas-des-Bois to Saint Malo. Cav let Steegmans go and decided to go 'in the wheels' with Greipel and Kittel, tangled with Veelers - taking the Dutchman down - and ended up third.
Interviews

The Tour of the Med, a nice way to ease into the season; a big bunch floating along under early sunshine with a bunch sprint at the end? Not quite! How about 95 K in 1:45 with the peloton ripped apart from the gun and conditions so cold that the contents of your bottle are frozen solid in five minutes?
Diaries

I woke with a start, in the middle of the night, damn! I thought, things I should have mentioned, in the diary - Blockhaus; today's mega climb, we caught sight of it yesterday morning as we hurtled down the Autostrada.