In winning the Tour of Thailand, Alex Coutts joined an elite club – British riders who have won an overseas national tour.

A couple from the memory banks are in 1965 Vin Denson won the Tour of Luxembourg and in 1988 the hugely under-rated Cayn Theakston won an epic 19 stage Tour of Portugal – but there aren’t many more.  We caught up with Alex, just after the Scottish hill climb championship.

Remind us about your pro career, Alex.

“I went to race in France when I was 18 and spent half a season there with a small club. The next year, I raced in Italy with Harry Lodge’s Endura team. The programme was good; I can remember racing against Di Luca, for instance. I signed for an Italian team for the following year, but it fell through. After that, I spent two years in Belgium, with Flanders.

When I look back, it was good fun and again, the programme was good – we raced in Belgium, France, Germany and Switzerland. I worked out, the other day, that I’ve now raced in 25 different countries.

After Flanders, I had a season with DFL. Then it was back to a Belgian team – Babes Only. There was good management, but the sponsor lost interest when his son – who was on the team – stopped racing.

This year I was with Giant Asia, it was Dave McCann who spoke up for me.”

“I thought that our programme was finished after the Tour of Thailand, but we actually have the Japan Cup in late October [Ivan Basso’s comeback gig] and then a 10 day in China in early November. I had a holiday after Thailand and started training the day before the Trossachs; I can feel it coming back, so I’m not panicing – yet!”

“It’s not bad at all, the season is built around nine stage races in Asia; apart from those it’s up to you where you race. I haven’t actually raced that much – I lost a chunk of my season after that crash in the Girvan, when my chain snapped; I’ve had back problems with that ever since.”

“Winning in Thailand, it was six stages and the opposition was strong, particularly the Germans and Iranians.

The Iranians could have beaten Tyler Hamilton in the Tour of the Quinhai Lakes, if they had ridden as a team – they were the best climbers in the race. The local standard in the Far East is actually pretty high and the prizes are good.”

“I’m not sure yet, I’ve been talking to Giant, but it could be Belgium or maybe even closer to home [VR could have said more here, but our lips are sealed!]. I don’t have an agent – that’s part of the problem.”

“Cold! The worst was when I came back from Langkawi to the Girvan; I think I had frostbite!

I can handle going from here to the heat, but I find it much harder coming back to Scottish weather after I’ve been racing in a hot climate. It’s the travel that’s hard – it doesn’t seem to bother you on the way there, but you’re very tired when you come home.”

“It’s good, as long as you don’t eat the fish. On of my team mates did and ended up having to go home because of food poisoning.

I like the spicey noodles and the rice and chicken are usually fine. The Tour of East Java in Indonesia was rough though – we’d been travelling for ages and when we got there, it was cold rice and cold chicken. I came out of that race the lightest I’ve been since I was a junior!”

Jim Leslie is waxing lyrical about a frame you sold him.

It’s my Giant Asia team manager’s business. He has them made in the same factory as Giant, they’re very good value for money – a TT frame in full carbon is £900 and a road frame in the same, is £600.” 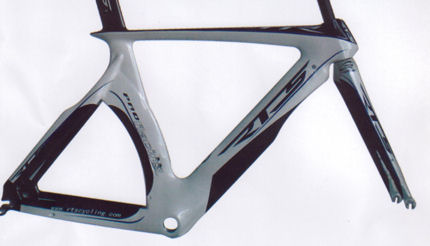