Mark Cavendish blasted to his first victory of the Tour today at Brignoles, a victory that also places him in the green jersey as the leader of the race’s points classification, for the first time in his career.

The Columbia-HTC rider took his fourteenth win of the season and his 42nd career win with a powerful charge for the finish line that left him clearly ahead of runners-up Tyler Farrar of the United States and Roman Feillu of France.

Afterwards Cav hugged and thanked his Columbia-HTC teammates for having given him such strong support during the stage.

“The team were superb, they’re all great riders and I’m just glad I can win at the end of everything they do for me.

“There were a lot of squads trying to get past us. They were all very keen to get a result, but we kept going and kept going and when we do that there’s only ever going to be one result.

“I was able to go all out and get the win. It was perfect for us, and it’s perfect to be able to do that after such hard work by my teammates. It’s a very special result and now I’ve got the green jersey, I couldn’t be more satisfied.

“I have two goals here. My personal goal is to finish the Tour, and my job, my second goal, is to win stages.

“I don’t think it’s wise to go for the green jersey right from the start, so now I’ve won one stage I want to go all the way to Paris and see if I can win some more and maybe take a last win on the Champs Elysées.”

Cav’s fifth Tour de France stage win of his career takes the total of wins for Columbia-HTC men’s team to 51, and comes just a few hours after his teammate Andre Greipel won the opening stage of the Tour of Austria.

The guy in the paper shop commented about my Milram tee shirt, this morning; “are you watching the Tour on TV?”

It was nice to be able to say; “I’ll be over there for ten stages, next week!”

The Observer gives le Tour a full page, complete with list of drug offenders who live in Monaco, courtesy of Richard Moore; I’ve been working on the basis that if we don’t talk about ‘the D word’ maybe we’ll have a clean Tour – I hope so.

We also got the tit-bit that Cav’s bike is painted to look like a world war two bomber – those guys at Scott are creative, but isn’t that just a touch Basil Fawlty?

It’s going to be bad when Viktor sees it.

And – “Brad in yellow after the TTT” says Vaughters; we’ll see.

Al emailed us with views and photos from AS, this morning (see below). Spain has at least three sports daily papers that I remember, Italy two and France has L’Equipe; whilst “sports mad” Britain has none – but we have got The Daily Sport!

With a ten stage disappearing act about to happen, this is a domestic weekend for me.

But like the best sprint trains, I got my timing right; back from a walk along the prome with 12.5 K to go and the four breakaways in sight.

Ignatiev jumped, but he was never going to hold off Columbia.

Much as you have to respect the words of the Eurosport crew when they talk about other sprinters; there was only one man going to win today.

Columbia had nine on the front and Hincapie went so hard that he prized himself, Renshaw and Cav clear.

Only Tyler Farrar could live with them but this wasn’t his type of finish, he needs it long and straight and fast – the classic drag race.

If it’s down to explosive stuff then Cav’s the hydrogen bomb; and he was lengths clear of the Garmin man at the line.

Feillu was third and Hushovd fourth; but this looked like the first of many to me, for the man from the middle of the Irish Sea; he’s on a different plane.

Even Viktor is impressed;

“It’s been a good start, Monaco yesterday was an amazing setting for the time trial and today Cav was very impressive – I just hope it doesn’t tail off after the first week, like it did after a good start in Brittany, last year.”

And Vik says that when I talk to Tyler Farrar on the phone tonight, I have to tell him that he must demand a lead out train from Jonathan Vaughters!

Of all the Spanish Sport daily’s, AS is my favourite, not just because of the back page lovely (although it is a good reason), but because they look at most sport with an open mind, whereas Marca is too “right wing”, too Real Madrid, and they take themselves too seriously.

Today in the interest of equality I bought both (though I’m not sure if VeloVeritas can afford it!) and, well, they both agree on one point; Alberto Contador has shown the Astana team who is the leader.

“Contador es el jeffe” [Contador is the boss]. He beat Armstrong by 22 seconds in 15.5 kilometres, now the water currents maybe more tranquil after the visit to Monaco, this could be the end of the exaggerations of the war (at Astana).”

Also in AS they talk to Carlos Sastre, last year’s winner, about his problems at the start of yesterdays stage 1 TT.

He had said he would be starting in yellow with No. 1 on his back, well the Tour decided that since the “Caso Landis” in 2006 no one has worn the yellow jersey on the first stage, Periero didn’t in 2007 and Contador wasn’t there in 2007, because Astana where not invited, so no yellow skin-suit for Carlos.

Then just after he started a piece of his helmet fell off, he said it was only “a little problem”.

Now with Marca, after 18 pages on Real Madrid, they say: “Contador es el lider” [Contador is the leader], a little different, but to the point!

They show that Alberto (the madrileño) took 17 seconds out of Lance (the americano) going up and five more going down and on the flat.

Johan Bruyneel said “Contador is the leader of the team”. All this was alongside a photo of Contador with Spanish F1 champion Fernando Alonso.

Armstrong is quoted to say “Alberto Contador ha estado muy grande” [Contador is in great condition], which was nice, but doesn’t tell us anything we didn’t already know.

2006 Tour winner, Oscar Pereiro, has his own article in Marca entitled “El dorsal 111” [his race no. is 111], and today he starts with “Vivir en una pelicular” [Living in a movie] referring to his days in Monaco as the ‘Tour of Glamour’, like being inside a film, a Bugatti parked outside the hotel, and the clothes ‘without parallel’… the crude reality of France awaits with the hotels of Ibis and Campanille!

“Monaco has the glamour, but no tradition of cycling”, but he liked riding through the tunnel at 50 kph thinking that F1 cars go though it at 300 kph.

Well that’s what the sporting press in Spain think of the first stage of the Tour, Contador is “The Boss!”

I walked past a sign on the beach below the Promenade des Anglais in Nice this morning.

… the sort of thing that used to get Jacques Goddet, one-time overlord of the Tour, very hot under the collar about a lack of professionalism when the peloton abandoned racing full-on in favour of a little cooling water.

Even sitting still waiting for the race to fly-by the PMU sprint on the prom was a struggle. It looked like it was going to be a very hard day for the peloton, even when they reached only as far as Nice.

SaxoBank were keeping the pace high, the Rabobank/Ag2r-led breakaway had only a couple minutes, as Kurt-Asle Arvesen put the Norwegian jersey on the front to do the dirty work — the pace-setting in the hours before the TV coverage goes live.

Likewise, it wasn’t all glamour for the Rabobank team. Denis Menchov had a nightmare in the TT yesterday, and a puncture had left three of his team-mates struggling to get on terms. They hadn’t even got in line to work together … one guy looking over his shoulder, one guy drafting a team car, one more guy shaking his head with the effort.

I know how he feels. Three scorching days into my stint at the Tour and the blisters are already formed on my feet — we couldn’t get a bus out of the press room last night.

We’d already had to wait because the photographers and video guys had scooped all the bandwidth … and we had a train to catch.

So we hoofed it all the way to the station, fully laden with kit, in the night-time humidity. Well after midnght when we reached the hotel. It’s not all glamour at all! 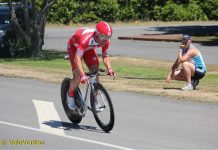 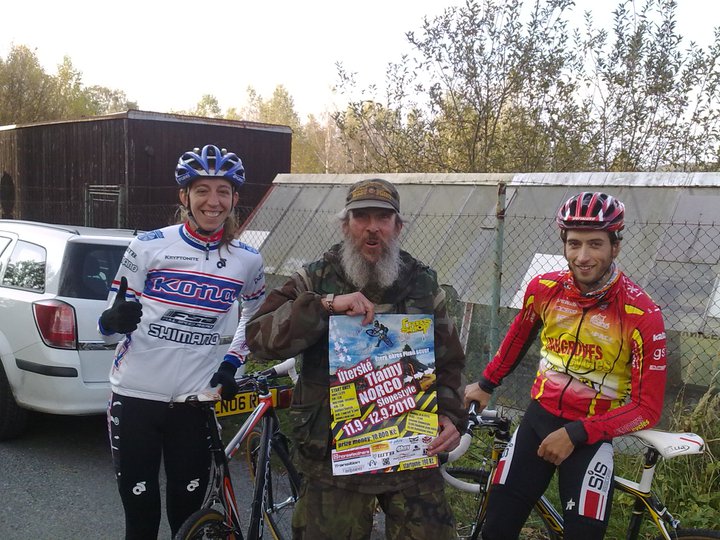 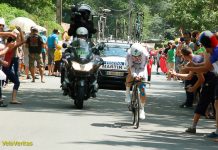 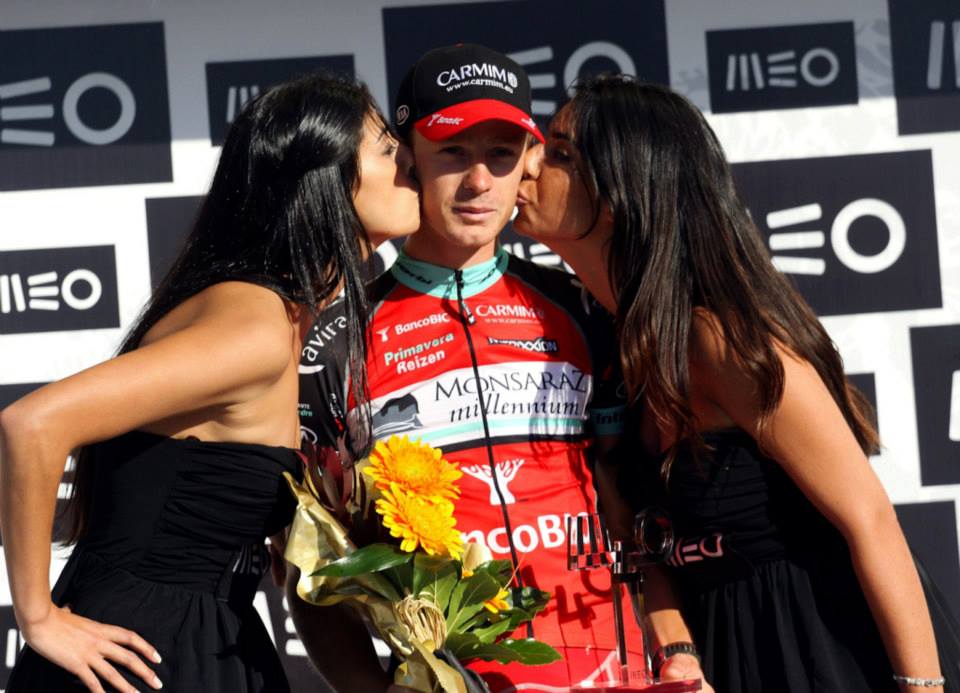 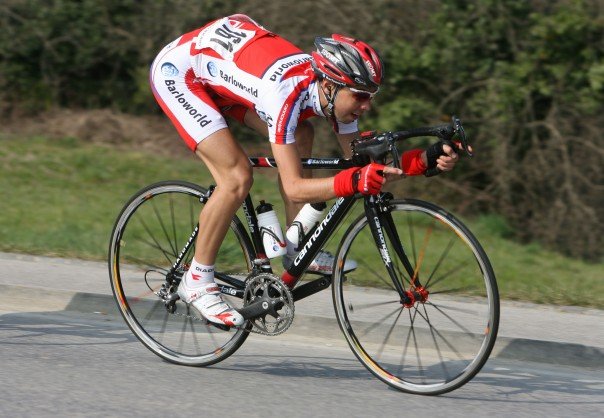 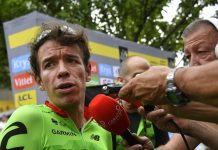 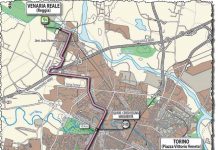 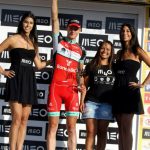 Diaries September 24, 2006
It's Sunday now and Paolo Bettini is World Champion. Erik Zabel's last chance of a rainbow jersey is surely gone, Valverde has another Worlds medal and I'd better try to get this diary up to date. I left you yesterday as the women's race was running its course. 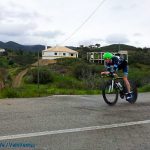 Tavira Pro Tomás Swift-Metcalf's Blog February 18, 2013
So I'm home now after the Volta ao Algarve, which, like always, proved to be very hard. The stages were all mammoth 200k slogs on twisty-turny roads through the hills. The stage finishes were a bit sketchy and the whole thing was topped off by a 35km TT through the hills on bad roads which were wet for the first half of the race.