HomeNuggetsThe VV View: Just what is the UCI Constitution meant to be...
Nuggets

The VV View: Just what is the UCI Constitution meant to be about?

The UCI Constitution is a little bit of a scary document, running to 23 pages with 87 articles, some of which have up to seven sections.

We thought we might pick out a few quotes; it’s ‘a non-profit-making organisation’ and should ‘encourage friendship between all members of the cycling world’ as well as ‘promote sportsmanship and fair play’ and there should be ‘non-interference in the internal affairs of affiliated federations.’

Just so we remember what the organisation is meant to be all about. 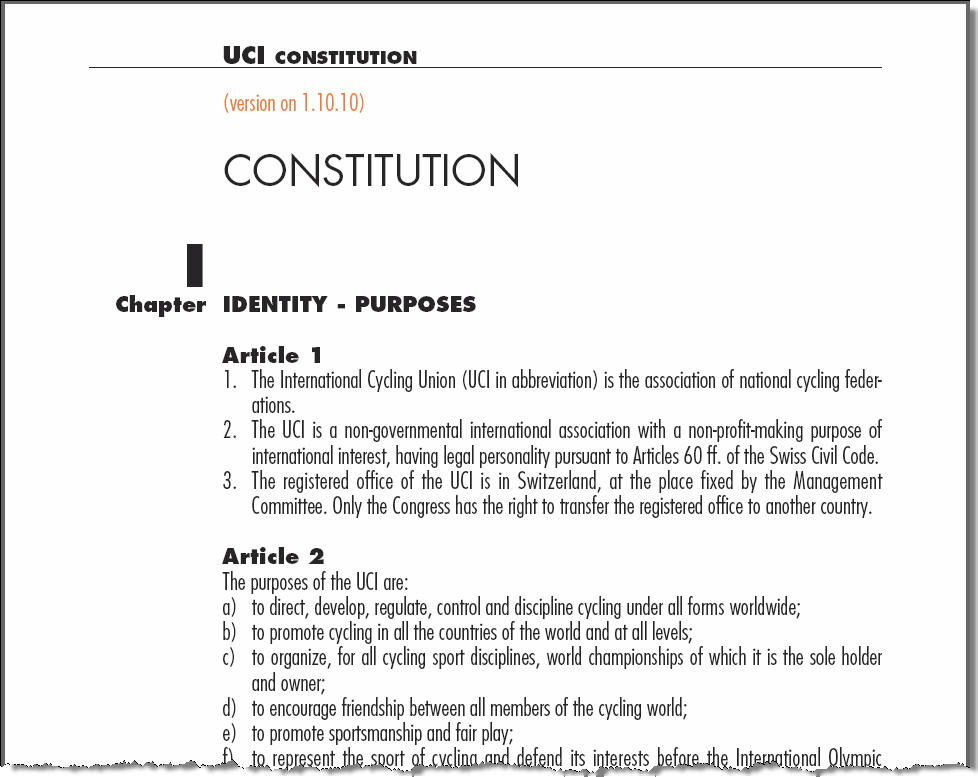 The Alberto Contador affair puzzles and upsets us; we’ve always admired the man and waxed lyrical about his performances and whilst we fully accept that the ‘meat defence’ is conceivable we cannot come to terms with the inconsistencies that go hand in hand with this matter.

It is our understanding that an athlete is ultimately responsible for what they ingest and the best that can be expected in the event of an ‘accidental ingestion’ is a reduction in the mandatory suspension for drugs offences from two to one year.

The ‘get out of jail’ clause for Contador is ‘UCI Article 296’ stating that ‘an athlete can be exonerated if they prove that they had inadvertently ingested a banned product through no fault or negligence on their part.’

In December of 2010 the Italian ISD rider, Alessandro Colo was suspended for one year as a result of testing positive for Clenbuterol in the Tour of Mexico last the spring.

The Italian enlisted expert help and despite his providing official figures which confirm that 18% of all meat in Mexico is contaminated with Clenbuterol: [VeloVeritas recently wrongly quoted a figure of 28% for which we apologise] and the Italian Olympic Committee accepting the defence he was still suspended.

This was on the grounds that ‘the WADA code deems that all athletes are ultimately responsible for what they eat and drink.’

Contador’s defence is that he ate meat which may have come from Argentina via Spain in a French restaurant.

The Colo case is much more straightforward, Mexican beef in a Mexican restaurant with official statistics to back the claim.

It’s hard to conclude anything other than the fact that there’s one rule for ‘unknown’ Italians and another for Tour winners with friends in high places.

And whilst we’re not in possession of all the facts of the Iljo Keisse case we do know that he presented a huge volume of evidence in support of his claim of ‘contaminated food supplement,’ was cleared by his national federation and declared free to race by both the Belgian and Dutch governments.

Again it’s hard to think anything but ‘one rule for you, one rule for me’ in light of the UCI’s seemingly obsessive pursuit of the Belgian.

We must also mention: Ricardo Ricco; we understand that with the man still in hospital and a full investigation not yet possible there can be no comment from the Italian authorities or UCI.

But when his health permits, questions must be asked as to how a notorious rider with a dreadful history of drug abuse can still feel safe to cheat in the fashion he did. It was karma which was Ricco’s undoing, not any test procedure.

And no rant about drugs is complete without mention of Floyd Landis; it seems to us that the UCI’s pursuing him for a retraction of his statements is a complete waste of money and effort — both of which might be better invested in getting to the bottom of the Contador and Ricco situations.

The way the whole Landis Affair has been handled confounds us, surely it would have been better to talk to the man and listen to what he had to say about the practices which he alleges are still rife within the sport, rather than to write him off as ‘unstable’ (and all of the other adjectives which have been applied to him).

Unstable, bitter, twisted or whatever else he may be there can be no finer source of information about the tools in the cheaters toolbox than Landis.

We know that Pat McQuaid doesn’t have much time for people like us;

“Unfortunately a lot of the media these days are led by people whose opinion is not educated; bloggers and so forth, and journalists who write under pseudonyms on blogs.

That leads to a lot of opinions but it’s not correct or the facts.”

We don’t use pseudonyms and we don’t get involved with blogs (other than for our own guest writers) but we are entitled to our opinions, which are driven by over 80 combined years of participation in and love for the sport.

Let’s give that to former Tour stage winner and yellow jersey, Cedric Vasseur who spoke to us on Tuesday;

“I still ride my bike for eight to ten hours each week; after I wore the maillot jaune in 1997 I would get people stopping me when I was on the road to talk to me or ask for autographs.

“For sure that’s not the case now, drivers no longer have respect for us, they think we are all corrupt.”

Facebook
Twitter
Previous articleThink Long and Hard Before Driving to Antwerp!
Next articleDan Patton Blog – Getting Back On It

The VV View: In the Bleak MidWinter

Josh Quigley – “The Greatest Distance Cycled in One Week – Unpaced”