George Atkins was a name that suddenly appeared on the Scottish scene back in the summer.

And on Sunday the versatile man from Leicester took silver in the British U23 Time Trial Championships, but before his foray into the world of riding ‘alone and unpaced’, he spent six weeks in Flanders, so naturally we needed to have a word with him, not long before the British Champs.

A successful foray to the Heartland, George?

“Yeah, I was there for six weeks and managed to get a win and some decent placings.

“I won at Geetbets, it was over 144 kilometres which is longer than normal for a kermis, they tend to be 100/120 K — it used to be a pro race and was a pretty decent affair.

“The little bit longer distance worked to my advantage, I think.

“I rode a couple of post Tour criteriums in Holland — at Chaam and Roosendaal and had decent results at Giel (8th), Schaffen (9th) and Grobbendonk (16th) where Tosh Van Der Sande (the former World Junior Points Champion) won.

“I found myself getting stronger as the races went on — initially I was missing strength in the last few laps.”

You rode the races for a Scottish club team – you didn’t join a Belgian team?

“My main focus was to get some racing in; I was only there for six weeks so I didn’t want to complicate things — if you have BC membership and a letter of permission, that’s all you require.”

“It varies, but 100 plus is common, I rode one with 180 starters; that’s a lot of
riders on a six kilometre circuit – it makes Scottish racing look a bit tame.

“You have to have your wits about you; have the mentality of constantly fighting your way up there.”

Which race was toughest?

“Probably the one I won – it never felt really quick but it was on very heavy roads.

“The first big race I rode was a culture shock — big time!

“The one at Schaffen was pretty hard too – the New Zealand national squad was there with Shane Archbold (Worlds Omnium Silver Medallist).

“Most of it was quick racing and I’ve come away feeling much fitter.”

Did anyone impress you?

How was the atmosphere at the races?

“It was great at the post-Tour crits — in Belgium it was either really noisy and colourful, with the fair and all, or really quiet.”

Did you train much, or just rely on racing?

“I did a fair bit of training; I’d do a good training block then race — the trip wasn’t just about racing, it was about making progress and having a good base for 2012.”

How did you spend your downtime?

“The bike takes a lot of looking after out there and you have to rest properly — relax, catch up with Facebook and the like.

“Then you have the cooking, I’m a dab hand, I enjoy it — I even thought about being a chef, but I don’t fancy the split shifts.

I was staying with Tim Harris (former British pro champion) out there; Dan McLay is there, too.”

“I’ve got the National TT champs (where he won silver) and I’m riding a hill climb so as I can qualify for the champs.

“The hill climb will be the end of my season but I want to get in plenty of four/five hour training blocks before the weather breaks.”

Are you a gym man?

“Just the bike, whilst I was in Edinburgh I put on upper body weight and want to shed that — I’ve never been a weights guy, I think if your position on the bike is good then you can build strength.”

Finally, tell us about your pumpkin and gorgonzola risotto. 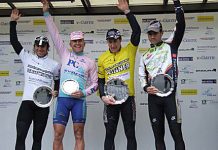 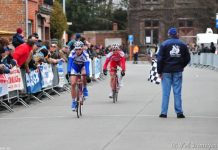 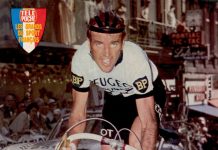 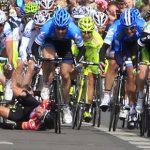 Product Reviews October 10, 2013
I spotted the advert for KAPZ custom headset caps in the magazine, and out of curiosity switched from Adobe Lightroom to Chrome browser to have a look at their website. 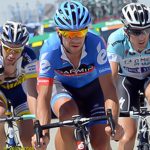 Interviews August 23, 2012
You have to be impressed by Sky’s riding here at the La Vuelta a España 2012. There was no show boating or ‘riding into the climb’ – they only went to the front when it really counted.