Young Sky star, Alex Dowsett’s early season was compromised by a bad crash in the Three Days of West Flanders – but he’s come back strongly.

He took eighth in the World Elite TT champs, rode strongly in the Tour of Beijing, aiding team mate Boasson Hagen on to the podium and closed his season with second place with Luke Rowe in the Duo Normand two-up time trial.

And the former European U23 Time Trial Champion achieves these results while suffering from haemophilia.

We chatted to him as he put his feet up for the start of his well earned winter break.

Tell us about the Tour of Beijing please, Alex.

“Due to illness and injury we only had a small Sky team – five riders.

“It was all about putting everything into getting Edvald Boasson Hagen on the podium. We had to really commit on the last day to get the bonus seconds to achieve that.

“I thought Beijing might be a bit of a procession but not a bit of it – all the teams were committed on the climbs and the sprints were every bit as tough as usual.

“I enjoy it, you have to compromise, you’re out of your comfort zone, there’s no bus and the food is a bit different, but it’s a great experience.

We went out early and came back a little late so we were able to spend a little time taking in the sights – the Great Wall for instance. The only big downside is the smog, a lot of folk were affected by that.”

That West Flanders crash knocked you for six, didn’t it?

“It had a big negative impact, yes.

“I was off the bike for two months, was on 14 tablets each day for a while and required four operations.

“It took a long time to get back – I was finding that I was fine for one hour in a time trial but didn’t have the depth for stage racing and always suffered a bad day.”

Does your haemophilia affect your recovery?

“Not at all, that’s not an issue – it was the infection I picked up from the first operation, staphylococcus. It’s the same strain as MRSA – my armed swelled up as a result, it was huge.”

And how’s the ankle injury we heard about, last year?

“It’s OK. That is related to my haemophilia; when I was young I had heavy internal bleeding in my ankle and elbow.

Has there been a higher level of expectation on you at Sky with this being your second year?

“No, the team has been brilliant, there was no pressure to come back too soon.

“I was pleased to get that eighth place in the Worlds TT; it proves that I still have it in me. I’m on the same numbers in time trials as I was last year, but over the next two winters I want to improve my strength and get closer to Phinney and Martin.

“I’ll working with my coach, Paul Manning on that – we’ve been together since Varese in 2009.”

You took silver in the National Road Race – that looked sore.

“Yeah, it was a hard day, hanging on to Stannard for the whole race.

“I was happy with silver, Ian deserved the win, he does so much work for everyone.”

And you won the National TT again.

“Originally, I wasn’t even meant to be riding – I was down for the Vuelta but Chris Froome wanted to ride and they sent Richie Porte, too.

“It was nice to defend the title, even though none of the really big hitters like Millar or Geraint were there.

“I hope to do the hoops justice, again.”

Tell us about your Worlds TT.

“That was an interesting race, the course was very technical with a lot of climbing – the most you were on the tri-bars at a stretch was four or five kilometres.

“I took a completely different approach to that race. Usually I cover up power and heart rate on the computer and ride on speed – get up over 30 mph out the blocks.

“But I discussed it with Bobby Julich before the start and he explained that he thought I should ride on power – and I trusted his judgement.

“I focussed on power, with the Cauberg coming so late, we agreed that I should ride 400 to 420 watts on the flat and go to 450 on the climbs. My early time splits times were down, but I came back as the race progressed.

“I felt on top of it the whole way and never felt like I was fighting with it. Apparently, I climbed the Cauberg as fast on my own as we did in the team time trial!”

The TTT was maybe a disappointment for Sky?

“We lost Sergio Henao, early, he just had terrible legs – then we lost Geraint with a mechanical, his chain came off and jammed; you can’t wait in that race.

“Geraint’s had a lot asked of him, this year – the Giro, then Olympics, then the TTT.

“If you’re down to four it’s very hard, your spell comes every fourth man instead of sixth man.

“I felt better than I thought I would in the race and I think it’s an event we can do well in for the future.”

You rode the Duo Normand with Luke Rowe – he’s not known as a ‘chrono man’?

“Luke’s a solid bike rider and was strong on the day – I did maybe 60% of the work. We talked about riding the Duo Normand at the Eneco Tour.

“It’s a fun race to ride, we enjoyed it – especially with lots of Brits roadside.

“We lost a minute to Durbridge and Tuft, but the parcours really suited them.”

No Chrono des Nations for you?

“No, this season has been long enough – and stressful enough.

“I was third last year behind Martin and Larsson but I need to knock this season on the head – even though it’s a lovely race.”

“I want to move things on, this was a learning year – I was 40 seconds off a Worlds time trial medal and think I’m more than capable of making that up.

“I’ve showed that I can win road races and time trials – and I’d like the opportunity to ride my first Grand Tour. 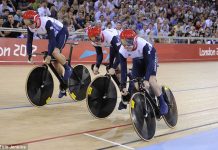 Race Previews September 24, 2009
Some hill climbs boast a long and colourful history, some have gruelling gradients that are talked about in revered tone throughout clubrooms the length & breadth of the country, whilst others claim to have the richest prize list in the UK.