One of the stars of the Glasgow World Cup endurance events was Martyn Irvine.

Although better known as an omnium specialist, the 27 year old took silver medals in the scratch and pursuit.

Altogether a good week for the Irishman – having also just signed a pro contract with big winning US team United Healthcare.

How did you get into cycling, Martyn?

“I got into cycling in the most random way. I had no interest in sport at all when I grew up and was working as an apprentice mechanic.

“The guys at the garage cycled – slowly but surely I was bitten by the bug!”

You’re from Newtonards – how far from the famous ’25’ course?

“I grew up about a kilometre from the Portaferry road, the famous Boardman/Obree legend still lives on!”

On the subject of tests – nice ride in the Irish Champs, just 35 sec. off Hutchinson.

“I was totally surprised; I knew how hard I was training but never really tested myself all year.

“I borrowed a bike that week, had ridden it once and just went for some good training with a small thought that I might do well.”

Track racing – how did you get into that, in Ireland?

“I was racing in Belgium and the Irish team were trying out riders for their Team Pursuit.

“I tried out and wasn’t too shabby, the rest is history!”

The Olympic Omnium – unlucky 13th – how do you rate your performance?

“I will always look back at the Olympics with a sick feeling in my stomach.

“One of the worst days of racing I’ve done.

“I think I did a bit to much preparation for the Games and was digging a hole the last few weeks.

“I honestly feel that the kicking I received at the games made me a stronger rider when I recovered.”

The Glasgow World Cup – two silvers, you must be chuffed?

“Yes, where’d that come from?

“Honestly, I had a gut feeling I could do well in the Scratch Race. During training I always had it in the back of my mind.

“With seven laps to go though, I thought I screwed it up!

“The Pursuit was a bonus though. Andy [Sparks, Director at Performance United. Editor] my coach, had me doing a lot of Pursuit work but I have never really seen myself as a pure pursuiter, that’s changed though.

“The World Championships are my target, getting sub 4:20.”

But not your usual discipline, why not?

“My track career has been one of necessity, I’ve been doing what I’ve had to do to race on the track.

“First Team Pursuit then the Omnium; they’re disciplines I had to do to because of the team goals or to get to the Games.

“I always enjoyed the Points Race, the Scratch Race and the Pursuit.

“When the chance came up to do them I jumped at it – I wouldn’t have missed the Omnium last weekend!”

Which disciplines will you choose for the 2014 Commonwealth Games?

“The Pursuit for sure, then either the Scratch Race or Points Race.

“I love a fast hard race and think the Points Race could be good.”

How did you connect with United Healthcare?

“The American Olympic track team trained in Palma, Mallorca where I was training and Andy introduced me to Mike Tamayo and Hendrik Redant.

“After a quick chat, post training, I left the velodrome and thought no more about it.

“A few months later Mike come back to me with the news, I was over the moon.”

Where will you be staying in the US?

“At this very minute I’m not sure, it’s all up in the air, gonna see where it lands and go with it!”

Do you know your programme, yet – will there be much European racing ?

“I said; ‘see what you think at the first training camp and I’ll go with your plan’.”

Do UHC support your track ambitions ?

“That was the best thing.

“Mike knows the track and one of the first things he did was say he was happy for me to stay with it up until the Worlds.

With your coach it must be stressful to train for the Omnium?

“If you think I’m bad at the Omnium now you should have seen me before Andy!

Andy taught me so much stuff on the sprinting side of things that it’s almost natural now to do the things he helped me with.

“And also the Kilo, flying lap and sprint stuff.”

“I love any of the endurance stuff, probably Scratch Race the most.

“With a passion I hate the Devil – I’m just not made for it!”

With all that versatility, do you ever fancy the Six Days?

“I would love to do some of the Six Days!

“I did a summer Six Day in Italy this year and thought it was fun. I won the 100k madison at the 6 Giorni Delle Rose… I just don’t know the right people I think.”

When are you going to take a break from all this bike racing?

“I love it too much!

“My choice would be to stick at it as long as I can, I’ll try my best to do that.” 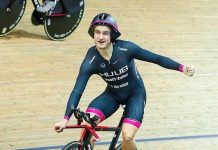 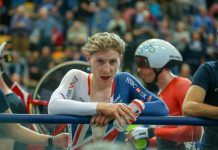 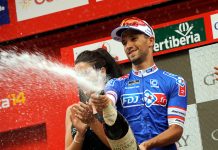 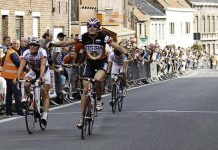 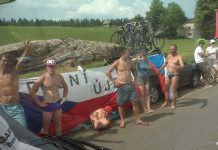 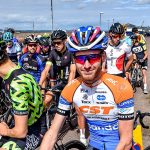 Interviews October 21, 2018
Our first question to Grant Ferguson, perhaps better known for his mountain bike and cyclo-cross (he’s reigning British Elite Cyclo-Cross champion, don’t forget) adventures, following his win in this year's Scottish Hill Climb championships was "did you have a back brake this time, Grant?" 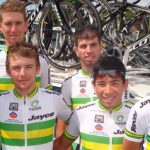 Interviews January 28, 2015
He has a great name for a cyclist, Sam Spokes; we first spoke to the young Aussie in 2013 when he was making a name for himself with QuickStep U23 feeder team, Etixx. Last year also saw some nice results - but not enough to move him up to the Etixx World Tour squad. But all is not lost, he’s signed with Australian Pro Continental team, Drapac – and in his first race in the Aussie team’s distinctive red jersey he made the winning break in the recent Australian Elite Road race taking a solid fifth behind winner Heinrich Haussler (IAM Cycling). 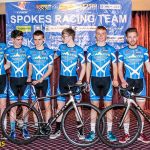 Stories January 30, 2018
So it’s that time of year again, festive excesses are the subject of new year’s resolutions that melt away quicker than the recent snow. For some though the resolve is stronger and none more so than the young men of Spokes Racing Team.