At his ninth attempt, Herbalife-Leisure Lakes Bikes’ Gary Hand finally ‘done the business’ in the Scottish road race championship; timing his move to perfection on the final climb inside seven miles to go and holding off a desperate chase from reigning champion James McCallum (Rapha Condor JLT) and David Lines (MG-Maxifuel Pro Cycling) to win on his own.

We caught up with the man who eats the miles – but not much else – on the Monday morning after his win.

Congratulations, Gary – give us your ‘National stats,’ please.

“Nine rides and five medals before yesterday – but no gold.”

Did you do a course recce beforehand?

“Not the main lap but we drove the finish lap in the van to get a feel for it.

“From the top of the climb to the finish is five miles – that doesn’t take so long in a van at 60 mph.

“But I can tell you, they were the longest five miles of my life!”

“Good, the organisers did a really good job – there was still a big group coming in the finish lap.

“Scottish courses can be too tough for the standard of the field but yesterday was good.

“With the big laps being rolling and flat there were always guys trying to clip off the front – it was a good race.”

“I felt good, I definitely had good legs.

“I knew after the Lincoln that I could last 100 miles, so I thought I’d go with the moves to put pressure on the other favourites.

“They couldn’t let me go in a break so I knew they’d have to counter; I wanted them to know they been in a race, before the big climb.”

But you made your winning move on the hill?

“There were four of us away – James, Davie, Callum Wilkinson (TheBicycleWorks.com) and me.

“I let James and Davie set the early pace – I wanted to make sure their heart rates were up; and then I attacked at maybe 75% for 10 seconds, to see who would come with me and how my legs felt.

“I was doing 47 mph on the descent and 27 mph on the flat – it was flat out effort to stop them from catching me.

“I glanced round a coupled of times; James was leading on one occasion and Davie on the other.

“I was conscious that if one of them could take a wee breather then they’d maybe try and take a flyer across to me.”

Did you realise how close it was at the line?

“The finish straight was a dream come true – I couldn’t believe I was going to win!

“I free-wheeled across the line so I could savour it – but I’d glanced back and knew they wouldn’t get me. All the sacrifices, all the training, the dieting, in that moment it was all worth it.

“It was an amazing feeling, my fiancee Laura was there, my dad, friends – I just wanted to enjoy it. And folk are saying that I was emotional at the finish – it was just that I’d had a fly in my eye . . .”

It must be hard work being a marked man with no team mates?

“It was the same for James and for Davie – but I have to say that it wasn’t too bad, there were a lot of guys with strong legs trying to stir things up.”

Was it a positive knowing that Davie was behind and might not chase you as hard as he would another rider?

“As I said, when I looked back, I saw them both chasing so I didn’t know what was going on.

“I was focusing on me!

“I won the race on the climb; after that I just held on, there was no shelter and no one to sit behind.

“If someone behind had the legs then they could try to jump across. James defended his title well, he took the race on when he went away solo; and it wasn’t an easy race – the average was 25mph.”

Did you taper for this one?

“To tell you the truth, it’s one of the few Scottish races I’ve rested going in to. The other weekend when I rode the Crow Road and Kilmacolm criteriums, I did 25 hours training in the week.

“My focus has been on the Premier Calendar races.

“But I eased off for this one; just turned my legs in the week leading up to it.”

How has your Premier campaign been going?

“I was 26th in the Reservoir, which doesn’t sound great but there were 180 starters and only 40 finishers. I felt that I was riding well – but you need that element of luck.

“I made the top 40 in the Lincoln but again had better legs than the result suggests – I was in the race and involved in breaks late in the day.

“Seeing Evan win the Reservoir gave me a lot of motivation, it lets you see what’s possible.”

How’s the Herbalife team working out?

“Very good, Neil and Linsey Taylor and Geoff Newcombe give up most of their free time to help the team.

“They can’t do enough and we’re organised in every race we ride – with designated leaders and everyone knowing their role.”

“The Beaumont Trophy Premier, that’s the week after the Nationals in Glasgow – but Sky will be there . . .

“It makes a big difference to you power to weight and I feel comfortable on climbs where I’d have been feeling it, last year.”

“I had a few glasses of red wine in the evening – but on the way down the road, Laura, Davie and I stopped at McDonald’s.

“I’ve not had one for ages – and when you’ve been having guilt trips about whether or not to put butter on your bagel, a Big Mac tastes amazing!” 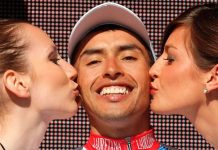 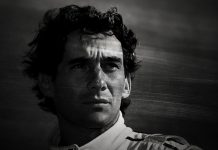 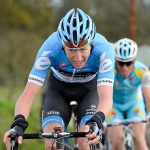 Interviews April 28, 2012
In the Flèche Wallonne - just for a few minutes, as the much diminished peloton ran in towards Huy and the final gun fight on the Mur - it looked like Canada’s Ryder Hesjedal might just steal it. The 31 year-old Garmin ex-mountain biker in company with Norwegian Sky man, Lars Petter Nordhaug blasted big gears into the foot of the hill. 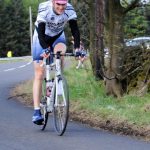 Interviews April 20, 2011
The three guys behind the blog and podcasting site "Velo Club Don Logan" may be 'foul-mouthed and ill-informed' (their words), but they're also nice lads and very entertaining too. After listening to the fantastic podcast of their interview with Graeme Obree - in which Graeme talks openly about previously unexplored aspects of his life and career - we had to find out more about this site and the men behind it, and we caught up with them recently to get a bit of background and to hear their plans... okay, there aren't any plans...