On Sunday, Rapha Condor JLT 22 year-old Mike Cuming won the eight stage UCI 2.2 Tour of Korea from a field which included Pro Continental teams MTN and Champion System, to join his dad as a member of that exclusive club.

‘Catalonia’s not a country?’ best not say that to a Catalan.

In addition he was second in the Tours of Italy, Spain and Switzerland.

But there’s one National Tour the Brits have been particularly successful in; the Tour of Ireland – with the likes of Scotsman Jimmy Rae, Doug Dailey, Brian Jolly and Russ Downing all on the roll of honour.

And another man whose name is on that Emerald Isle list is a certain Mr. David Cuming (GB & Fangio).

Cuming comes off good stock, grandfather Jim Ogden was a successful time trial rider, as was mother Louise; whilst his Tour of Ireland winning father Dave was a pro from 1978 until 1985, riding for Viking, TJ Glemp, Fangio and Wightmann after a successful amateur career which included a stage win at Girvan and the Lincoln Grand Prix.

Cuming junior was never forced into the sport but quickly revealed he had flair for it; with the then-new Raleigh team signing him for season 2010 – bearing in mind he’s currently still only 22 years-old.

In 2011 he rode for Essex-based Twenty3c Orbea; but for last season he signed with Rapha Condor – with a win in the British U23 road race as the hi-lite.

But Sunday in Korea marked a turning point where Cuming made the jump from ‘up and coming’ to ‘arrived.’

We spoke to him the day after his long flight back from Korea.

Congratulations on a fine result, Mike – what’s the race like?

“It’s UCi 2.2 and really well organised – everything seemed up to standard.

“I rode the race last year and it’s certainly improved, they’ve got new people involved in the organisation and it’s gone up a level – last year everything was fine but this year just seemed smoother.”

You got off to good start, fourth on Stage One.

“Yeah, I was lucky, I chinned off up the road in a group – but it was a hard stage.

“Every day was hilly and there were a lot of climbs on that first day; the race blew apart, there was a big group at 20 minutes (with 10 failing to beat the time cut and six DNF, ed.) it was split to high heaven.”

“We had two guys in there; most of the guys in it were well down the GC – but a couple of the guys from the move the first day snuck in there.

“We didn’t feel it was our responsibility to chase and expected MTN to defend the jersey – their man Kristian Sbaragli was in yellow – but they didn’t.

“It was seven man teams and there were Pro Continental, Continental and National teams all in there – so it was a lottery.”

Stage Three and another good placing for you – seventh.

“My first mountain top finish; I’d never done one, before.

“It was a nice race that day and I thought it was a good opportunity for me to move up the classment – I was happy at the end because that moved me up to eighth and I thought that a top ten on GC was possible.”

How was Stage Four?

“It was pretty stress free, the leader’s team let a break go then controlled things and it came down to a bunch kick.”

Stage Five was the TTT and Condor Rapha JLT was only three seconds off the win.

“That was an innovation, there wasn’t one last year.

“What makes the ride all the more impressive is that for most of the TTT we only had five riders, we lost a man early on one of the climbs; and Luke Mellor got sick out there and had abandoned by that stage.

“MTN won it from Champion System; they’re both Pro Continental teams – and whilst it was disappointing to miss the win by just three seconds, if we’d been asked at the start if we’d settle for that result, we’d have definitely taken it.”

Stage Six and you took yellow.

“It was a grim day – raining and with 1st category climbs, I wasn’t climbing that well but I was getting over them.

“My team mate Richard Handley did a great job for me that day in the first half of the stage, helping me over the climbs.

“Then half way through a move went which was the perfect composition for me and I got with it – Tom Southam was in the team car screaming at me to; ‘ride, ride, you’re in yellow!’

“It was a great feeling and the lads were all super chuffed for me.”

But for Stage Seven you were down to two team mates?

“I lost two team mates on Stage Six; on all of the stages there were climbs early and it was full gas at the front – so if you lost contact it was very, very difficult to get back.

“After Stage Six the guys were so happy for me but you could see the disappointment in their eyes that they wouldn’t be there to help me in the final stages – but they had given there all for me and there’s nothing more you can ask.”

Stage Eight, you started with a 12 second advantage – by the finish it was only nine?

“There was a three second intermediate time bonus – which he won – and 10 seconds bonus on the finish line.

“But then I thought; ‘well, if he does that then fair play, he deserves to win.’

“And there were a lot of teams going for the stage win – so that wasn’t likely to happen.”

You said it was a really difficult race to control.

“We had to be really cautious about who we let get away on Stage Seven – and with just three of us it was tough to control.

“But you could see that Cheung’s team was flagging towards the end and he was becoming isolated.”

Are we allowed to ask about the post race celebration?

“There was nothing too special – we had a really early flight home the next morning – but we did have a bit of a barbecue with the Korean Condor folks.

“I’m tired today with a bit of jet lag, but not too bad – I didn’t ride today (Tuesday) but will get back into the swing of things, tomorrow with a little spin.”

Have you had much Media interest?

“Bits and bobs, it always nice to get a bit of attention.”

Dad must be pleased.

“He’s over the moon; he was staying up into the night to watch the race on the live feed every day.”

Will we see you in Glasgow defending your U23 title?

“No, I should have been born a week later – I’ll be there, but scrapping with the Elites.

“I turn 23 in late December so that excludes me from the U23; if I’d been born in January it would have been a better situation for me – but it won’t matter when we’re all vets!

“I’ve not looked at the course in detail but it’s kind of kermis style; folks are saying that there are no hills but there will be grippy bits I’m sure – and it’s guaranteed to be super-aggressive!” 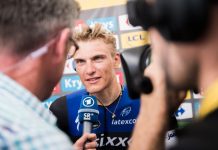 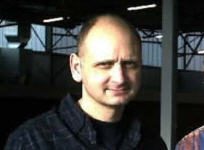 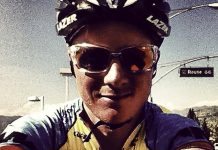 Diaries September 29, 2014
Spanish sports paper, Mundo Deportivo says; 'El Tigre, en la Lieja-Ponferrada-Lieja' comparing the race to an Ardennes Classic. 'A complete cyclist with a brilliant future,' they say of the 24 year-old Pole Michal Kwiatkowski. Despite a tiny box on the front cover, the race gets two-and-a-half pages with nice colour pictures. 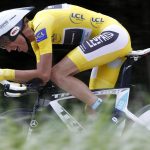 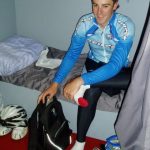 Diaries February 8, 2007
Lotto Zesdaagse van Hasselt 2007. Kris picked me up at Dusseldorf Weeze airport at tea time yesterday (Wednesday), it's actually only about two kilometres from Holland so it wasn't long before we found a frites stand. Hasselt is in the Limburg region of Belgium, Flemish speaking and with a population of about 70,000. The local tourist office brochure tries hard to talk the town up but there's not much to say - a nice-enough place though.