Iain and Silas took time to talk to VeloVeritas about their rides after a couple of days of recovery rides.

Congratulations, Iain – did you change your training much for the 50?

“No, it was pretty similar; a mix of top end, threshold and recovery – my training tends to follow that pattern all year.

“The week leading into the race saw me doing 90 minutes I.T. and two hours steady on Tuesday. Two-and-a-half hours on the TT bike on Wednesday. I did some short intervals on Thursday; Friday was easy and then Saturday I did some efforts during an easy ride.

“Now that I’m doing the coaching it gives me more time to train and recover.”

How was the course?

“It was on the A78 and A71 dual carriageways with a few rises to test the legs – but I thought it was a really good course.

“It was a head wind out to Troon and I thought myself that I had to watch not overcook it.

“It was a tough day with the wind but at least it stayed dry.

“I was a really well organised event – there are a lot of roundabouts and junctions on that course but they were all well marshalled and I felt safe throughout.”

Did you ride on power or ‘feel.’

“Over the longer distance, if it’s a dual carriageway it’s a bit easier to control the watts you’re riding at – it’s more difficult if it’s lumpy.”

Did you gear a bit lower over the longer distance?

How was the British TT championship for you?

“To be brutally honest I rode mostly just to be part of the experience – but I did my best on the day.

“The experience was fantastic – Scottish Cycling really pulled the stops out.

“It was great to see the locals outside their house watching and the course was fantastic – particularly with the rolling road closure which meant you didn’t have to worry about junctions.

“I hope we see it back again; I’m not sure where the Commonwealth Games TT will be but the race was a great experience for me – especially since I live just 15 minutes away and train on those roads.

“And on the subject of the champs, I’d like to say a big ‘thank you’ to Ian, Robert and Paul at Dooleys for all the work they did on my bike – they had to take it from non-UCI legal to UCI legal and then back again.

“And to the guys at drag2zero who lent me a ‘nose cone’ for the Trinity for the race.”

When I texted to set this call up, you mentioned; ‘testing a client’…

“As you know, I work with Mercury Performance Coaching and V02 max testing is one of the services we offer – we can do it to max and sub-max levels, looking at heart rate and power too.

“And we look at the nutrition aspect; it’s so important, what you eat is the fuel your body runs on . . .

“The V02 max test is the best indicator if you have the potential to be an elite athlete – even if you’ve never competed.

“It’s the test which British Cycling use to see who has the potential to make the grade.”

What’s the most common error you see cyclists make?

“It’s hard to generalise – but a lot of the time I don’t think people train hard enough and don’t recover properly, either.

“It’s hard as an amateur with family and job constraints but if you have a training plan then you must adhere to it.

“If it’s a recovery day but the sun is out you can’t just pedal off down the coast for hours. You have to commit to your plan and stick to it – if you don’t then you won’t improve.

“Hard has to be hard, easy has to be easy and your nutrition has to be right.”

“Well, yes, my train of thought is that the guy who coaches me – Terry Bell – raced at a good level, so it’s not just about book learning, it’s about having done it yourself.

“So for me it’s about doing well but also showing that the training works.”

“Sunday I did 70 minutes easy to loosen off after the effort then Monday and Tuesday I’ve done two or three hours easy – the rest of the week will be easier miles with efforts in there.

In the silver medal position was a man whose ambitions differ hugely from Iain’s – there’ll be no 160 kilometre time trials for him later in the year.

His distance of choice is just 2.5% of that – the four kilometre pursuit on the boards of the Sir Chris Hoy Velodrome in the 2014 Commonwealth Games is where Silas Goldsworthy sees himself.

“Aye, it’s not what I trained for – I actually only entered the day before the closing date.

“I expected to beaten by Iain over that distance so I’m happy with silver.”

Were you getting time checks?

“No, but I was taking splits off Arthur Doyle at the turns so I could vaguely work out where I was.”

How did you gauge the ride?

“I record the data but don’t look at it during the race – the best time trial I did this year was when my Garmin fell off!

“Can I say a big thanks to Sean Childs too – my disc malfunctioned shortly before the start and he loaned me his spare disc wheel, which was very kind.”

“I entered the British ’10’ and ’25’ because they’re down as qualifying events for the Commonwealth Games.

“It would have been the wrong thing to do, a weekend with all that travelling when I was already tired – it was painful sitting at home but I needed the rest.”

And bad luck in the BC TT champs?

“I went off course five miles into the race and my head went a bit after that.

“I should have binned it right then but I don’t like to quit in a British Championship.

“I had good sensations so I think the ride would have been OK – not as good as last year when I was top 10 – but OK.

How’s your pursuit of that 4:30 Glasgow qualifying time going?

“It’s a challenging time to hit but we’re looking at building towards it at the British Champs at the end of September.

“We’ve been trying different things in training but back in the spring it just wasn’t working.

“We identified the main reason as the working hours I was keeping – I was on emergency call in my job as a vet and just not recovering from training efforts.”

“It was just a training exercise, if I was looking at trying to achieve a pursuit qualifying time then there’s no way I’d have ridden it – but it’s three months out from then so there’s no problem.

“I’m in an endurance phase at the moment and I punctured in the 2012 edition so wanted to ride.”

“Yes, I’ve considered that but it was difficult to fit in around my job – I’ve simply not had the time to get the endurance training I’d like.

“That’s why I’ve quit my job – I hope that’ll be the game changer.

“Now I have to get a programme together…”

Are you on the track at Glasgow, much?

“I was in the spring and will be again within a few weeks – once this endurance phase of training is complete.

Quitting your job is a big commitment.

“I’m still working as a locum but I can tailor that around my training.

“It’s a once in a lifetime opportunity to go the Games; but there’s no way I could get the best from myself if I was doing spells of working 72 hours virtually right through.

“I hope to qualify by the British – but I have until May 2014 to achieve the time.

“I’ve spoken to friends and family and they all say I’ve done the right thing with my job and committing to my training.

“To ride in a Scotland jersey on Glasgow velodrome in the Games – I gotta go for it !” 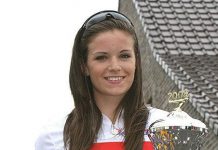 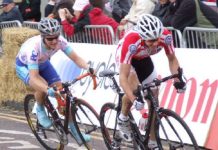 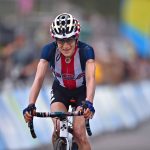 Interviews June 22, 2020
Mara Abbott is twice a winner of the overall GC in the Giro Rosa, picking up seven stages along the way not to mention two second places, a fourth, a fifth and 10th on GC. Abbott retired from the sport after finishing fourth in the Olympic Road Race in Rio, 2016. She took time to speak to us not long after her retirement; here’s what she had to say. 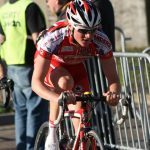 Team Wiggins Pro Dan Patten's Blog May 30, 2010
Dan Patten's Blog - So, I'm recovering well - so well in fact that I came my closest to date to winning here in Belgium last Sunday, finally ending up in 3rd place, but so close to taking the win. 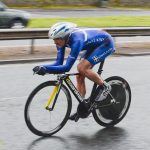 Race Results September 3, 2006
The results of the "Rising Westerly" 100 Mile Time Trial held on the Aberdeen/Stonehaven/Deeside course, and organised by GS Corsa. Carlos Riise (Shetland Wheelers) made another successful "air"“raid" on mainland cycling by comfortably winning the "Rising Westerly" by over 14 minutes from Granite City RT's Norman Skene. Sadly, Scottish 12hr Champion, Joe Wilson (Sandy Wallace Cycles) crashed at Aboyne and was forced to retire. Carlos reported that Joe was probably just over a minute up on him at the time.