VeloVeritas cycling sage, Vik hates those narrow bars Adam Hansen uses – they’re to make him more aero and save those precious watts – but they certainly didn’t do him any harm, today in Cangas de Morrazo.

Not just a win, he has saved Lotto’s Vuelta – so now it goes from ‘Ligthart and Hansen enlivening the breakaways’ to ‘stage winning’ – and that’s about a million miles.

But first let’s see if we can read today’s pre-Worlds runic symbols from Galicia, home to some of the world’s best seafood – and Generalissimo Francisco Franco.

You can admire the plaques to celebrate El Caudillo‘s (Hard Man) birth in the town of Ferrol – last time we were there he was still sitting on his horse, twice life size, just inside the naval dockyard gates.

You don’t see many statues of Hitler and Mussolini, these days – but I digress.

Degenkolb continues to impress, he’s climbing so well, as is Matthews; little would surprise us about that talented young Australian – and with Gerrans demonstrating his form in Canada, the men from Down Under will be a real force, two weeks on Sunday.

And who was that man in pink and blue who crossed the line in third place ?

Pippo – back from the dead.

We’d love to see him ‘up there’ at Ponferrada – but he’ll have to make the Italian squadra, first.

Sky worked hard in the finale; harder than they really had to – but neither Contador nor Hansen were complaining.

And here’s what the genial former MTB man and Aussie TT champion had to say in Jerez, just before Lotto rolled down the start ramp:

Let’s get the free ad. in first, Adam – your famous shoes, they looked so much less ‘prototype’ at le Tour?

“One more step and they’ll be just right; but they need some more time.

“Maybe the final version will be ready for the Tour of Beijing?”

Tell us about the rest of the Hanseeno ‘goodies,’ please.

“Team hats have been going well, plus the shirts.

“I will be adding a new style of shirt soon.

“I’ve had positive feedback from customers and it’s nice to hear that, very satisfying.”

How much of a rest did you take post Tour?

“For seven days I did nothing.”

Do you have to worry about your weight right after a Grand Tour?

“No, I’m am really good with my diet.

“I had good weight in the Tour.

“This time last year I lost 4kg between the Tour and Vuelta.

“This year I didn’t want to do the same – more maintain my weight and lose those 4kgs starting the last week and be in good form for Beijing.

Lotto must be pleased with how their Tour went with Gallopin and Greipel’s successes ?

“Only three teams wore yellow and we were one of them.

What’s been your programme into the Vuelta?

“If you mean racing, nothing, just training.”

How many Vueltas and Grand Tours is this now?

“This is my sixth Vuelta and my 10th Grandy straight.

“Almost enough for a reason to retire…”

What are the team’s goals for the race?

“We have Maxime Monfort for GC and Jens Debusschere for the sprints.

“Pim Ligthart and I for breakaways and then rest for their own chances and helping.

“Its a really open Vuelta for us.”

Who will you be rooming with, what are there good and bad points?

“Good points: same interests, we get along well, like each other – and he doesn’t smell.

“Bad points: loves air con. I hate it – think I already have a sore throat from it.”

What’s the ‘Joker’ in Lotto?

“That’s a sub-company of the Lottery in Belgium.

“Almost the same but a different style of gambling.”

The Vuelta is much less ‘janitorial’ for journos than the Tour, is it the same for riders?

“It’s the most relaxed of the three Grand Tours; but on the same side, a lot of riders know this so they take more of their own chances – you get a lot of hungry young motivated riders.

TTT to kick off – is that a discipline you like?

“Yeah, I do. I love how the whole team gets involved and works together.

“Everyone’s nervous and not wanting to disappoint the team.

“In stage races or normal road races you can hide, but in a TTT there’s no hiding.”

Covadonga – tell us about it.

“A beautiful place, I was there on holidays once.

No Madrid finish; TT in Compostella instead, a good or bad move?

“But I do like the Madrid stage very much.”

Will you be doing the whole race just on gels?

“However our team chef makes some pretty good lactose free muffins I might steal for the race.”

On the subject of nutrition – Lotto take their own chef?

“Yes and at the rate he is going, we’ll all put on weight.

How do you spend your down time on a Grand Tour?

“I actually brought a book with me – made from paper.

“So I started that, going to be full on: ‘The Transformation of Consciousness’…”

Do you control the play list on the bus stereo ? give us a few examples.

“No, that’s Greg. He was playing Spice Girls, bit of Aqua (‘I’m a Barbie Girl’) and Britney…

And what happens after the Vuelta?

“The TTT, Worlds (I hope) and Tour of Beijing.”

But before The Worlds and Beijing there’s the matter of Stage 20 to the top of the HC Puerto de Ancares by way of a third, a second and two first cat. climbs.

The final beast is 12.7 K long rising to 1.655 metres above sea level, elevating some 1.115 metres from base to summit with an average grade of 8.7% and a maximum grade of 18% – it’s not the ‘Queen Stage’ but coming as it does on the second last day it’s going to be savage.

Froome will attack, Contador will defend – it may just all come down to that final time trial – but we think that Alberto is up to the challenge and won’t be far off Christopher’s back wheel at the top – or may even get there first.

There’s only one place to be on Saturday afternoon – your sofa. 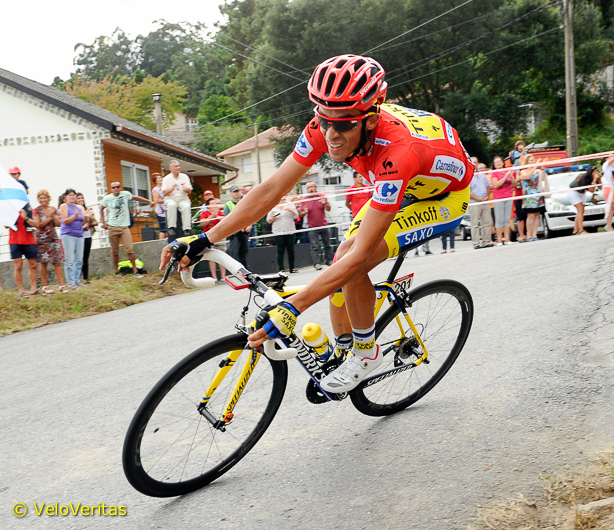 Vittoria Bussi – on Breaking the World Hour Record in 2018

Harry Tanfield has been prominent in a couple of stages at La Vuelta and rode well to finish last on the Angrilu on Sunday. To celebrate Harry's accomplishment on this hardest of stages and because it's interesting to see the mindset of aspiring riders making good, we present again our chat with him from six years ago when he was making a name for himself in Belgium's kermises.
Diaries

The weather was glorious on Sunday morning in Oviedo. After liberating the car from the car park - at huge expense - we were off, and stumbled right onto race route. The direction arrows made life very easy as we followed the whole 100 mile parcours. Race route ran through El Padrun, a tiny hill top village, in fact it was the first classified climb of the day. Four years ago, Davie and I stumbled upon El Padrun whilst searching for the Angliru.
Race Reviews

Samuel Sanchez summed it up best in the BMC press release for Stage 20 to Ancares; "To understand how was hard it was, you only have to look at the riders' faces." That was certainly true of Chris Froome, his face ashen, skin tight on his skull, eyes popping, gasping for air like a dying fish.
Race Reviews

Echelons formed out of Barakaldo, Froome turned killer, Valverde was ambushed, the podium shook itself into shape early and a nice guy won. If that sounds exciting – it was.
Race Reviews

Movistar top and tail la Vuelta as Italian Time Trial Champion, Adriano Malori has the weather gods on his side and rides in the dry whilst the GC boys look like they’re pedalling on ice around the technical circuit in beautiful and historic Santiago de Compostella. The last time I stayed in Santiago weeds were sprouting from the cathedral’s lovely facade, so that scaffold was no surprise – a face lift was long overdue.
Race Reviews

Movistar win Stage One in Jerez de la Frontera – no surprises, then. Perhaps we could have expected more from reigning World TTT Champions, QuickStep but with Tony Martin just back after a break and a technical parcours where it would have been easy to pile up, the Belgian team took no chances and finished fifth.

This interview was first published in December 2009, but in light of current events, we thought it would be interesting to re-read it and compare it's contents with what's in Tyler's book 'The Secret Race'... Now that the initial furore has died down following the shocking news of Tyler Hamilton's positive doping test, VeloVeritas thought we should hear what the man himself has to say. It took us a long time and a lot of patience, but eventually he came back to us with the answers to our questions.
Editorial

In recent weeks we’ve lost three important figures within our King of Sports; Norman Hill, a man who did it all, road, the Belgian Kermis scene, Six Days, big motors, even cyclo-cross, Bernard Tapie, the man responsible for riders beginning to get paid what they were worth, and track coach Heiko Salzwedel.
Editorial

If you're a VeloVeritas regular you'll be aware that we take full advantage of our, "right to rant." Freedom of Speech is something we take for granted in a Western Democracy. But recent events in Paris remind us that it's a principle which people surrender their lives to uphold.
Race Reviews

Defending champions and race favourites, Ribble Weldtite with strong men Dan Bigham, James Shaw and Simon Wilson took the CTT Team Time Trial Championships title on a cool, damp but still morning at Irvine on the west coast of Scotland, with a time of 54:01, averaging 55.9 kph to best their own ‘B’ team by 2:32, the line up there being Zeb Kyffin, Joe Wilson and Matt Gibson.
Diaries

And now Le Tour de France 2009 is all over; it's Monday morning and we're in a cafe at Montmartre - lucky us, I'm taking care to savour the moment. Even though the coffees are four euros each.
Interviews

Two course records obliterated within days of each other over the Easter weekend? It could only be that man John Archibald (Ribble Pro Cycling). It’s good to see he’s put a disappointing Worlds pursuit behind him - and the margins he’s breaking course records by takes VeloVeritas back to those ‘Obree Days’ when every weekend produced another ‘wow!’

Vittoria Bussi – on Breaking the World Hour Record in 2018