The Ten Best Climbers in Cycling 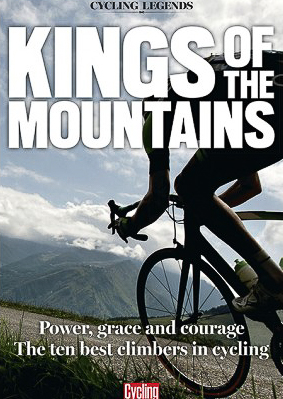 I took the Cycling Weekly ‘bookazine’ about the best ten climbers ever in with me for some ‘easy’ reading.

There’s such a selection of printed matter on the sport now, magazines, special publications like this one and a never ending stream of books.

But maybe it wasn’t the best of choices; Bahamontes, Julio Jimenez, Van Impe, Herrera, Winnen – all so far, so good.

But Charly Gaul with major psychological problems after he quit, living as a hermit in the woods; Ocana, suicide over health and business worries; Fuente, dead from all the kit he took; Millar, not living the life (in my opinion) a man with his palmares should after he quit; Pantani, the conspiracy theorists are still debating that one – but whatever the answer he’s dead well before his time.

And I got to thinking about two other doomed climbers, Thierry Claveyrolat, suicide over personal problems – and Jose Maria Jimenez heart attack in a psychiatric hospital where he was being treated for cocaine addiction.

Maybe it’s down to all that the kit the sport ran on back then or maybe it’s the huge void that’s left after retirement ?

The climbers are the men who get the best opportunity to enjoy the adulation of the crowd; stamping upwards through a tunnel of adoring tifosi bound for glory but at a speed that makes them easily and instantly recognisable – and then…

No more training camps, new bikes and jerseys at the start of the year, laughs round the dinner table with the boys, waving to the fans at the sign-on, corridors of worshipers on the cols or pretty podium girls handing over the flowers and fresh climbers’ jerseys.

Whatever the reason, it’s so sad to think of my dapper boyhood heroes Ocana and Fuente, gone.

The staff were great in The Royal but I was so happy when they let me home and even happier when I caught the Omloop Het Nieuwsblad ‘repeat’ on the box.

It’s the first time in a decade I’ve missed being at the race.

The 2016 winner, Greg Van Avermaet is the real deal, a proper Flemish roadman from a bike daft family he’s had podiums in de Ronde, Roubaix, San Sebastian and Het Nieuwsblad giving him a bit of a name as a ‘nearly’ man but he’s won stages in Tirreno, le Tour, Eneco Tour, Tour of Belgium, and Tour de Wallonie – and the GC in the latter two.

But Het Nieuwsblad and Kuurne aren’t just about the racing – there’s the new hardware, old friends, the Flemish countryside – and the juke box selections in bar Vivaldi.

Kuurne was also a visitor to my TV with big Jasper Stuyven riding a brilliant race to win after finishing top 10 the day before in Het Nieuwsblad.

Stuyven was World Junior Road Race Champion in 2009, spent time with Axel Merckx’s team in the USA and first ‘blipped’ big on the radar when he won a stage in last year’s Vuelta despite riding with a broken bone in his hand.

But I couldn’t help but think that a year or two ago QuickStep would have ‘had’ him on that pan flat finish circuit and set it up for Big Boonen – but Old Father Time is an adversary who always wins in the end even against a Legend like Tomeke.

GVA and Stuyven helped clear all those dead climbers from my mind and my spirits were lifted further when I was the beneficiary of a royal visit – Vik arrived at the door.

‘Contador spends too much time trimming his sideburns; it doesn’t matter how badly Cav is going, he’ll go to Rio; why isn’t there an egg and spoon race in the omnium ?, etc. etc.’

But it was nice to see him, just back from February spent in Spain and looking tanned and relaxed – as opposed to me, white as a sheet and still wrapped too tight.

He stayed in Benidorm, not far from Al Hamilton who he’d met up with when he was out there.

Al is in Polop at the foot of the Coll de Rates, a Strava and Vuelta favourite.

Al gave him a pile of Spanish cycling mags for me; it seems that Spanish cyclists are just like British ones – all they want are bike and equipment reviews and pictures of energy bars and bowls of muesli.

One day folks will realise that most of the current carbon frames come from the same one or two factories and aerodynamics don’t really play a big part at 17 miles per hour.

Next on the agenda was Wednesday’s ‘Le Samyn,’ live from Belgium, named after Jose Samyn who died in a race accident in 1969; the race was previously known as the GP de Fayt-le-Franc with Samyn winning the initial race in 1968 and the race thereafter named in his honour.

It’s a UCI 1.1 with 16 cobbled sectors, this year’s edition was conducted in freezing rain – Niki Terpstra (QuickStep & The Netherlands) destroyed everyone but 26 years-old Englishman Scott Thwaites (Bora) thumped his huge gear into second spot on the back of 10th in Kuurne-Brussels-Kuurne.

Thwaites went from being a mountain biker to winning the Lincoln GP in a couple of seasons, if his progression continues he’s sure to net a ‘big one’ soon – but Scott, please don’t sign for Team Sky…

Saturday and the Strade Bianche; I was finding my feet now as a sofa fan – something I rarely get the chance to do when I’m well and, ‘running about daft.’

The ‘Spartacus’ patter I don’t like – slaves don’t actually build their Paris-Roubaix winner’s trophies into their saunas – but you have to respect Fabian Cancellara (Trek & Switzerland).

Despite Stybar (QuickStep & Czech) having team mate Brambilla (Italy) work himself into the ground, the ex-World Cyclocross Champion had no answer when the Swiss went at the top of the ramp to the Campo – impressive and a warning to those with sights on the Monuments.

Track Worlds time and much has been written about how close it was and how GB will pull it back for Rio; I’ll just say two words Bobridge & Edmondson…

I tried to get hold of Brad to take that bet on his house but he hasn’t got back to me.

And sorry to go ‘techie’ on you but what’s with the tyre hugging fork crowns?

For London we had the ‘big’ fork crown pioneered by Felt where the air is given plenty of room to get past the tyre – it would be so interesting to sit in on the GB team ‘bike tech’ meetings.

Laura Trott was impressive as was Jason Kenny, the world’s most unlikely looking sprinter.

In ‘civvies’ you’d never look twice at the man – unlike Bauge who has real presence.

On the subject of Bauge, the French and German individual and team sprinters were strangely quiet; albeit Eilers took the (non Olympic) Kilometre and Keirin titles – both nations may well be gambling all on Rio.

If I had the choice, I’d put the madison, points, kilometre, pursuit and kilometre back in the Olympics and bin the omnium.

That said, the way the omnium is run now makes for good racing; a rider can go into the points with an ‘average’ score but if he rides a brilliant points race – as did Glenn O’Shea – then the fat can be plucked from the fire.

Gaviria under-scored that he’s ‘special’ whilst Viviani seemed strangely subdued when it looked as if the title was his.

And to take up on Vik’s point, Cav?

He had to prove himself in the Hong Kong World Cup – fourth.

The he had to prove himself in the Worlds – sixth.

And now we hear that he may well go to Rio but he’ll have to chuck the Tour after one week to train with the track squad.

His sponsors will be chuffed with that; as Vik says; ‘like it or not, even with the yellow bikes and Champagne and all the nonsense, the last stage of the Tour is the unofficial sprinters’ Worlds and sprinters’ sponsors will want them there.’

In Rio your omnium rider has to come from your team pursuit pool of five – Cav is by no means a medal certainty in the omnium and has never ridden a team pursuit at 4:00 pace, never mind 3:50.

It seems to us a ‘lose/lose’ situation?

But GB seem hell bent on taking him; there’s a subtext in there, somewhere – Vik reckons it’s to appease ‘middle England’ and despite his ranting, the man does get it right a lot of the time.

Paris-Nice next and Michael Matthews (GreenEDGE & Australia) showed he’s ‘special’ too, beating the specialists to win the prologue then holding the jersey into the hills.

Nacer Bouhanni’s (Cofidis & France) stage win was a belter beating big names Greipel, Kristoff and Matthews in a ‘straight’ sprint – revenge for his DQ in Stage 2 and a good portent for Milano-Sanremo where he was sixth, last year.

Things on the sofa just kept getting better as I was transported to la Bella Italia and Tirreno with BMC averaging 56 kph to win the TTT – and with March hardly started.

Smiling Czech, Stybar’s stage win was top drawer for QuickStep and his Colombiano team mate Gaviria beat Ewan, Viviani and Sagan for his sprint win – that laddie is definitely the real deal.

I was delighted with big Steve Cummings Tirreno stage win for Brian Smith’s Dimension Data but The Observer reckoned it was worth two sentences whilst Victoria Pendleton was afforded almost two pages on her managing to stay on the horse, this time round.

And on the subject of the media, as I waited patiently for Tirreno to appear ‘on the box’ I thought; ‘I’ll have a wee bit of that short track speed skating,’ remembering the deeds of Eric Heiden and Ard Schenk from my youth, albeit they were ‘long track’ guys.

Fortunately, no one ‘deramped,’ ‘disengaged’ or had a ‘negative split’ but is there no end to that man’s talents?

Sunday saw Alberto make Geraint fight all the way in Paris-Nice and on Tuesday Greg Van Avermaet became the first Belgian in 40 years to win beside the Adriatic.

I think I could get used to this lifestyle; in fact, must dash – not long ‘til Nokere Koerse and I have to fire up my coffee machine.

But pleased don’t let it be Cartlon…