Honestly, we think that Jason Kenny is a great sprinter – he can go short, long and is tactically very sharp.

He’s not six times Olympic Champion across three disciplines because he’s a dud.

But how can he be a professional?

He’s not raced since the Olympics – if he was a real professional then he’d be taking advantage of his fame and titles in Grand Prixs, revenge matches and the six days to top up his bank balance.

But I forgot, there are no Grand Prixs or revenge matches and the six day promoters go for the cheapest sprinters they can find.

And Jason might even be looking at a stipend reduction as the state sponsored amateur which he is – the funding is £4.3 mil. light for 2017.

Sir David ain’t gonna like that one (but to be fair, he’s likely more focused on what he will be telling Parliament’s Culture, Media and Sport select committee inquiry into doping in sport tomorrow, Monday 19th … watch it live here. ed.)

Sticking with the track, there’s a big colour picture of Elia Viviani’s Gent Six Pinarello in Cycling Weekly, this week.

The caption tells us that the Italian Olympic Omnium Champion would be on a gear of “95 inches, plus.”

Not for chases at the Kuipke he wouldn’t.

52 x 16 is still the gear for the chases in Gent and Bremen – big gears are fine on a 250m bowl but leg breakers on the ‘walls of death.’

Nice bike though… but 12 grand – for a track bike?

Yes, but with Louis Vuitton Moet Hennessy set to add Rapha to their stable to go with Pinarello we have to forget all that nonsense about; ‘the People’s Sport’ – unless you’re in Flanders or Brittany that is.

Young men are still winning on 1,000 Euro bikes there and pils or vin rouge is the tipple.

Moet’s more for folks that work in the City that can afford a bike that costs more than most folk’s car.

On the subject of the omnium – just when it was getting interesting with that ‘actual points’ race finale, they’ve gone and changed it – again. There are now no timed events – all bunch races.

This doesn’t suit big Ed Clancy but does suit our man, Mark Stewart.

It doesn’t suit reigning Olympic Champion Laura Kenny either who tells us that they’re messing with the race’s ‘history.’

That’ll be five minutes then, Laura.

However, we do recall the UCI telling us that when the kilometre and individual pursuit were axed from the Olympics, their heritage would be maintained by their inclusion in the omnium. Right…

Our remarks re. British Hill Climb Champion, Adam Kenway spreading fear and alarm among the continental pros by threatening to make their legs hurt on the hills in the Tours of Britain and Yorkshire, now that he’s a Raleigh GAC pro drew a response from one of our ex-pro contacts, down south;

‘Three grand a year doesn’t make you a professional, I think one of his big ambitions is to ride the Tour of Normandy – my ex-pro buddy (name withheld to protect the guilty gossips) told me he’d pay three grand NOT to ride that race.

“There are 120 French amateurs in there all desperate for a contract – they’d ride you out of the echelon and into the ditch without a second thought.”

Ah, yes! The Tour of Yorkshire – so hard and hilly it’s ‘beyond words’ we’re told.

Maybe someone should explain that two of the world’s best races; Milan-Sanremo and Paris Roubaix hardly have ‘saw tooth’ profiles.

I guess you need the steep hills so as the eejitz in their underwear can get more TV time.

Back to Raleigh GAC; they almost ‘popped’ last year when they failed to qualify for the Tour of Britain missing out on a big chunk of sponsorship which was dependent upon their getting the T of B ride. (The last race listed on the team’s website is the Leicester Castle Kermesse on August 14th this year, ed.).

That’s why the riders were free to do ‘their own thing’ at the end of last year – there was no money for travel or expenses.

Let’s hope for better things for Raleigh in 2017… 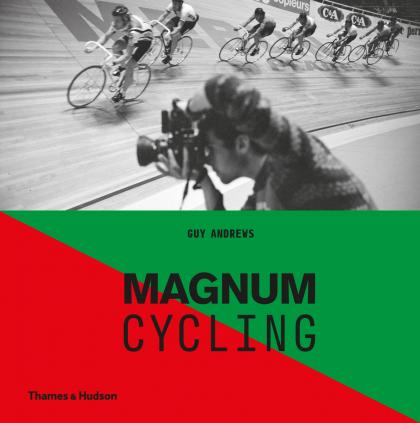 The other week we poked a bit of fun at Laura and Jason’s new book – not that it was rushed out to capitalise on Rio, you understand.

But this time we have nice things to say about a book; it’s the pick of famous Magnum Photography Agency’s archive of cycling pictures.

There are images from some of the all time great photographers – Robert Capa, Henri Cartier-Bresson and Rene Burri.

Not cheap but a wonderful few hours worth of browsing, especially with a good coffee or glass of wine.