Home Interviews Dan Fleeman – Sprinting to the Win in the Rutland – Melton...

Well, we were expecting that – the Movistar Spaniard and Sky’s Polish flyer Kwiatkowski were ‘super favourites’ and delivered two of the three podium places.

But what we weren’t expecting was the phone call from VeloVeritas soothsayer and mentor, Viktor on Sunday evening; ‘your man Fleeman’s just won The Rutland!’

Now, that was a surprise!

And that was before I’d even heard about the controversial finish to the race where One Pro’s New Zealander Hayden McCormick raised a digit at Fleeman, claiming that the Metaltek man had said he’d let him win?

But would you believe a man who was raised in the French and Belgian schools of racing, even if he did say he’d let you take the win?

Dan Fleeman used to appear in the pages of VeloVeritas regularly – British U23 Champion in 2004, he spent that season and the following one with the Pedale Sportive Creusotine club in France; turned pro with DFL in 2007 where he rode a cosmo programme – Het Volk, De Panne, the Tour of Luxembourg, Qinghai Lakes and the GP Isbergues to name but some of the experience he gained.

That ride got him a ride with Cervélo for 2009; his European season started well with a top 20 in the GP Lugano and there were rides in Paris-Nice, Fleche-Wallone and the Tour of Romandie before his season was compromised by a crash.

It was late season before his form returned and he rode well in the Piemonte and Lombardy – but there was no renewal with Cervélo.

After a winter of negotiations which Machiavelli would have baulked at – including the inevitable ‘flicking’ by an Italian team – he signed with GB Team Raleigh for season 2010.

There were good results on the international stage – seventh in the Pyrenees, 13th in the tough Ringerike in Norway and 15th in the equally hard GP Agostinho in Portugal – and a precursor of things to come with seventh in the Rutland but having raced in the Pro Tour it was hard to find motivation for city centre criteriums.

He rode again for Raleigh in 2011 and there was a top 10 in Canada’s biggest race at the time, the Tour de Beauce.

But the motivation had waned and he threw all his energies into his coaching business for 2012, ‘Dig Deep Coaching’ whilst racing mountain bikes with some success.

However, Fleeman was coaxed into signing with the Metaltek-Kuota team to race domestically in the UK and on Sunday delivered them their biggest win – and his own biggest since the Pyrenees – in one of Britain’s few international one day UCI races, the Rutland Melton Cicle Classic over the dirt roads around the Rutland Reservoir and Melton Mowbray.

Here’s what he had to say to VeloVeritas the day after his win:

It was nice of Hayden McCormick to gesture to you that you were number one at the finish when you beat him in the sprint.

“Yeah! Let’s just say that I don’t think I’ll be getting a Christmas card from New Zealand!”

Talk us through your win, Dan.

“It’s a race I’ve ridden well in several times but never won. In the past I’ve lacked confidence in one day races, I’ve always been a stage race rider so you have that conservative side where you’re thinking about the next day.

“But for this one I agreed with my team mates at the team meet the night before that the goal was a top 10 placing – but if the win looked possible then it was; ‘go for it, all or nothing!’

“It was fast early but I found it relatively easy sitting in the bunch around the Reservoir – over the first couple of sectors there were eight away with three AN Posts in there. It looked dangerous but I didn’t want to burn up my team chasing – fortunately a couple of teams took it on and with 140 K to go it was hard, flat out.

“But that suited me because I knew that to get a result I’d need it to be a hard race with the others on their knees at the end – whilst I was confident in myself over four hours.

“With 25 K to go through the start/finish there’s a little hill after it and I attacked, I was caught but recovered right away and realised that I had good legs and should wait for my moment.

“There was a new sector of dirt through the golf club with six or seven to go where it kicks up, I dropped Matt Holmes there so knew I was going well – he’s a good guy.

“There was a two K dirt sector and I was about 10 metres off the back of a little group – but I didn’t want to go full on over the dirt, that’s when you puncture. I got on over a little grassy section and started to work right away – that’s why I’m a little perturbed by McCormick’s comments about me sitting on, I certainly wasn’t doing that. We had a group 18/20 seconds behind with the likes of Russell Downing in there and couldn’t mess around.”

So what happened when coming to the line?

“It was down to McCormick and I and he starts talking to me – bear in mind I’m on the limit, there’s two kilometres to go and a group chasing – “can you sprint?” I think he said.

“And I replied; ‘no mate, not for toffee,’ or something like that.

“Then he says; “are you gonna let me win then?”

“And in a totally sarcastic fashion I replied; ‘yeah, sure!’

“We’re not a Continental team, just an ‘Elite Club Team’ and I think that McCormick thought I was just a club guy, he didn’t realise I’d ridden Pro Tour; he was trying to intimidate me into letting him win.

“But he chose the wrong man!”

You’ve never punctured in the race, how come?

“One of the reasons for that with Metaltek is that one of our sponsors is Continental so we get the Paris-Roubaix special team issue tubulars they have left after the elite race – they’re reinforced, terrific tyres.

“Apart from those there’s no ‘special’ stuff on my Kuota, just the exact same setup as for the road running 50 mil. EDCO rims.

“I ride my tyres at seven bars but don’t smash it through the sectors – that’s when you make mistakes, hit holes and puncture.

“I try to be well positioned into the sectors to give myself ‘slide room’ so that if I slip back I’m still in the group.

Tell us about the Metaltek team.

“When I quit after Raleigh, I’d had enough but I did some MTB stuff then I met Metaltek’s owner, Andy Swain at a bike show and he asked if I’d like to ride for his team.

“I said I wasn’t sure but he rang me a few days later and I joined.

“Initially I just rode MTB but the second year with them I started to ride road and rediscovered my love for it.

“The team’s well run on the budget available but we don’t think we’re QuickStep and win or lose we enjoy our racing, have a beer together and go home happy after events.

“But Metaltek is based in Melton Mowbray and Andy’s family home is about 200 yards from the finish so you can see that winning Rutland means a lot to him and the team.”

You must be in good shape to win a race at that level?

“Yeah, I signed up with Dig Deep Coaching – they’re good!

“Seriously, I know how to train now, this is my 17th season of racing at a good level so I know what works.

“I train around 12-15 hours per week, fitted in around having two kids and a full time job.

“I don’t ride Monday or Friday and there are no ‘recovery’ miles, just specific sessions, I don’t waste any time.

“If you’re doing 25 hours each week it’s easy for a lot of that to end up as ‘junk’ miles – I have five structured sessions each week and that’s it!

“If you have all day to train you can end up sitting about in your pyjamas until 11:00, I have my two hour training ‘window’ and I have to use it well.”

“It’ll be six years in July we’ve been going; my partner, Stevie Gallagher has moved to Australia to live and we’re picking up a lot of clients there.

“We have clients here in the UK obviously, all over Europe, Scandinavia and even places like Iran – our biggest untapped market is the US, we need to develop that.” 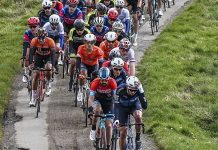 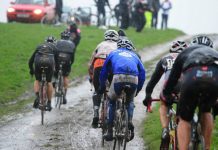 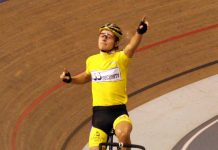 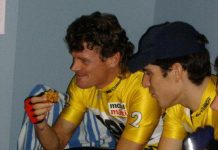 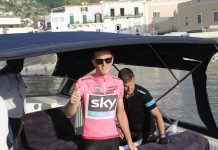 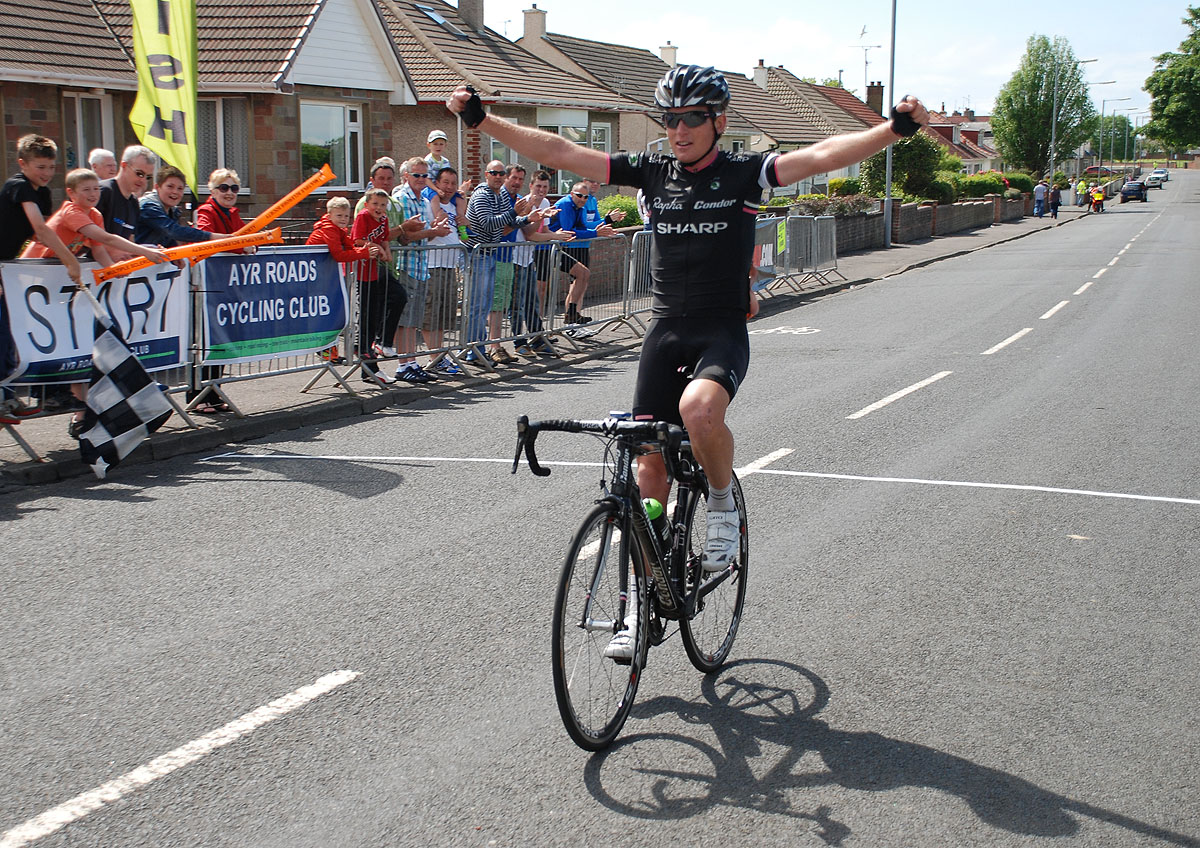 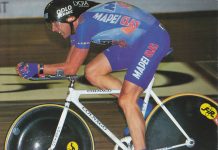 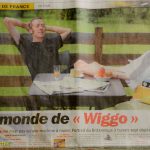 Diaries July 11, 2012
Bonjour! Today was our first outing on the Tour parcours, in the mountains it’s sometimes difficult to get on to race route, because just as in the Highlands of Scotland, there aren’t that many roads. We set the satnav for Ambronay, which was 73 kilometres into the stage but within easy reach of the autoroute and guided by Brian Blessed’s foghorn voice slipped along a network of tiny roads into the village, after we’d paid our last toll charge. 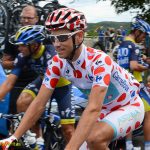 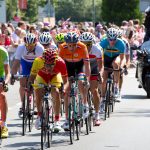