Home Interviews Pavel Sivakov – the hottest U23 property in the world

What’s the best thing an aspiring world class athlete can do?

Pick their parents carefully, of course.

The hottest U23 property in the world right now, Pavel Sivakov did that very thing; dad Alexei was a pro for 10 years with Roslotto, BigMat, CCC and Auber 93. As an amateur he won the Tour of Serbia and as a pro the Circuito Montanes; he rode the Vuelta and three Tours de France.

The young man himself is just 20 years-old and has been rampant this season winning three of the biggest U23 races on the calendar: the French Ronde de L’Isard and the Italian ‘Baby’ Giro and Giro Valle d’Aosta – all three major shop windows for the World Tour talent scouts.

Both of his parents are Russian but Pavel was born in Italy and has lived most of his life in La Belle France.

We kicked off by asking him which nationality he sees himself as?

“It’s a little difficult because I’m a mixture of all these different cultures but I grew up in France, so mostly French.

“I speak Russian at home with my parents, though.

“I will become a French citizen in a few months and at that time I will take dual nationality Russian and French.”

Was it inevitable that you’d become a cyclist?

“Probably! I have good genes for the sport, don’t I?

“But my parents never pushed me in to it, when I was a kid I did judo, soccer and tennis.

“It was when I was a second year junior I started to go pretty well.”

Did you get a lot of advice from your parents when you were a youngster?

“Yes they taught me a lot about racing; how to ride in the peloton, tactics and how to avoid doing stupid things.”

Was there any particular rider you really admired when you were a junior?

“Fabian Cancellara, winning all those Classics, he was the guy I admired the most – but I can’t think like that anymore, I’m almost at the stage that I am racing against the World Tour professionals now.”

“I started with Marco last winter and he’s the best coach I’ve ever had, he’s an advocate of training with the power meter; I enjoy working with him.”

Looking at your palmarès you made great progress in your second year as a junior.

“I think it was just a case of me naturally getting stronger as I grew but my results weren’t bad in 2014, I knew I had potential, I worked hard through the winter and developed more the next season.”

This season you seem at a level above the others?

“I wouldn’t say that, I’m not at a level above the other guys – my first year as a U23 was about adaption but I trained hard over the winter, with more intensity than before and that’s where my improvement has come from.”

Which of your three stage race wins has given you most satisfaction, this year?

“The Baby Giro for sure.

“The parcours were not the hardest of the three races but every day was a big fight.

“I was lucky that I had an amazing team riding in support of me and when I finally won it was a super nice emotion.”

“I’ll do my best but I’ve been at a high level for a long time this season and perhaps I’m past my peak?

“I know I’m a big favourite and I have a great team to support me – like I say, I’ll do my best.”

Then there’s the Olympias Tour, you were second last season – unfinished business?

“No! The Tour de L’Avenir is my last big goal of the year.

“I will go into the Olympias Tour with no pressure; I don’t want the pressure of leading the team in that race.

“Mentally it’s not so easy to go to race after race as the leader – I’ll ride for the team in that one.”

Do you worry that perhaps you’re riding too many stage races and risking ‘burn out?’

“No, no! I don’t actually have that many race days this season, less than last year, I think.

“I’ve really only been riding stage races with lots of rest in between – and when I’m on a training block I take rest if I have to.

“There’s the mental aspect too, it’s hard going into every race as leader – you need rest.”

Stage races are your favourite type of event?

“Yes, with the parcours the harder the better!

“But I like the Belgian races, on the cobbles; they’re hard but very special.”

You must be getting a lot of interest from World Tour teams, do you have a manager to handle that aspect?

“Yes, I want to focus on my job of training and racing; I don’t want the stress of that side of things so I have an agent to deal with it and allow me to concentrate on riding my bike.”

Obviously, the financial aspect is important but what else are you looking for in the team you sign for?

“The financial side is for sure not the most important thing; I’m 20 years-old, when I’m 30 then maybe money will be important but right now I want a team that will allow me to grow and won’t burn me out with too many races.”

“I love stage racing and the biggest stage race in the world is the Tour de France so it would have to be Le Tour.”

We’ll be keeping our eyes on Monsieur Sivakov in L’Avenir – and just to remind you that Felice Gimondi, Joop Zoetemelk, Greg Lemond, Laurent Fignon, Nairo Quintana and Warren Barguil all cut their teeth in the, ‘Tour of the Future.’ 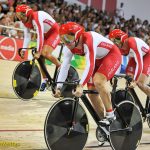 Race Reviews July 24, 2014
It's the first day of competition in the 2014 Commonwealth Games and the chat in the riders' enclosure before the start of the first track cycling session was that Australia and New Zealand had brought a team at the top of their game - and it didn't take long to become apparent this was true. Australia dominated the first day in a packed Sir Chris Hoy velodrome in Glasgow, taking six medals back to the athletes' village just down the road; two golds, a silver and three bronzes.

Nuggets March 21, 2010
'Sol y sombra' say the Spanish, 'sunshine and shade.' The 'sunshine' was the Primavera; a race I've been obsessed with ever since I was a young Merckx fan, waiting for my 'Comic' on a 70's Friday - Thursday if I was very lucky. The 'sombra' was Richard Russell's funeral; although maybe it wasn't 'shade,' as Bill Brockie, the former minister and CTC stalwart who managed proceedings so well, explained to us; 'this is a celebration.' 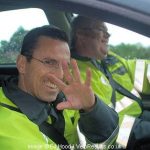