Home Interviews Mark Stewart – a Key Part of the British U23 World Championship...

The U23 Worlds in Bergen; a great race with a great finale with GB well there – Ollie Wood in fourth and our very own Mark Stewart a key part of the team which got Wood into a position to sprint for the bronze medal.

Gold went to AG2R and France’s Benoit Cosnefroy, silver to Lennard Kamna (Germany & Sunweb) – the two having slipped the peloton – with bronze to Michael Carbel Svengaard (Denmark & Veloconcept) who narrowly pipped Wood in the mad bunch charge for the line.

We just had to ‘have a word’ with Scotland’s own double European track champion, Mr. Mark Stewart:

Nice ride Mark, what was the GB game plan?

“Originally we were going to ride for Chris Lawless but he was ill; so it was pretty open on tactics – just go out and ride and have fun!

“It was actually late in the day when we committed to Ollie.

“I did some big spells on that last lap but was really only helped by one of the Danish guys, it was the usual, no one would commit – I think if we’d had one more guy working properly we’d have brought Cosnefroy and Kamna back.”

What are your thoughts on under 23 World Tour guys like those two getting to ride the U23 Worlds?

“Yeah, it’s a funny one – Kamna came in off the Vuelta which has to be a big advantage.

“But on the other hand, who can blame him for wanting to take up the opportunity to win a rainbow jersey?”

“The hill was manageable, there were 40 guys got over it together on that last lap, it was only three or four minutes duration.

“The descent was fast but with technical parts – there were guys getting dropped down there because they couldn’t get the cadence.

“I think it’s a course for Michael Matthews, Greg van Avermaet or Peter Sagan – or Ben Swift if he’s on his game.”

How was the distance for you, 191 kilometres is a long way for a track rider?

“It was no problem; there was one stage of 220 K in the Izoard and Paris-Arras was 200 K then I had the Tour of Britain stages.

“The first half of the race wasn’t too bad, it was controlled – the second part was very hard, though.”

Scott Davies looked good in the move with Sivakov.

“To be honest, I thought that might be the winning move but the Spaniards brought it back, they had fast finishers; Garcia Cortina was fifth in the last stage of the Vuelta.

“Scott rode ‘on one,’ he was in the break then rode that second last lap on the front for Ollie.”

“Not just the last lap, the last two laps were very hard.

“I had to move up with two to go and it wasn’t easy, the climb was down as 1.5 kilometres but it dragged up into it and the legs were hurting going into the climb.”

Was Ollie happy with fourth spot?

“I think he was happy, yes… You have to be realistic, there was nothing to suggest in his road results this year that he’d be contesting the sprint for a podium spot so he has to be content – albeit a podium would have been fabulous.”

Before we move on, how was Bergen and are the prices as brutal as we’re told?

“It’s a pretty cool place and the scenery out of town is amazing – and the locals were very friendly.

You’ve been a busy boy since last we spoke after The European U23 Track Championships.

“Pretty much nonstop – the Tour of Alsace, home, training camp, the Tour de L’Avenir then the Tour of Britain.”

How was L’Avenir for you?

“I was well rested into it but I’m not sure that’s the best thing for me – it took me a day or two to find my legs but the second half of the race I was feeling good.

“The Tour of Britain was good too although I have to say it was a wee bit boring; the break goes then you have three uncomfortable hours on flat roads and sometimes horrible weather until the finale.”

“The track Euros are in Berlin starting on 18th October, I’ll be riding the individual and team pursuits.

“I have the L’Avenir and Tour of Britain in my legs so my core strength should be improved – I had a 4:18 in the Europeans but I’d like to improve on that.”

When do you get a break from racing?

“It’s been a bit ridiculous but I’m taking a week to 10 days off, now.

“That’ll give me a couple of weeks before the Europeans; it doesn’t take me long to get back to speed after a break.

“That’s five months racing with hardly a break; riding a good World Championships was a nice way to end my road season.

“After the Euros there’s the London Six which starts on the 24th – I’ll be riding that with Ollie.”

“It depends how the team does in attracting a new sponsor, as you know, AN Post are pulling out. I can only sing the team’s praises, they’ve been great with me and the programme has been first class.

“For the start of 2018 though, I have a big commitment to the track with the Worlds in March and Commonwealth Games in April. With that in mind I want to put in a good winter. In the Worlds, ideally I’d like to ride the individual pursuit, team pursuit, omnium and madison – but that’s optimistic at World Championship level, I’d be spreading myself too thin.

“In the Commonwealth Games there’s no omnium or madison so it’ll be individual pursuit, scratch and points which is a much more realistic programme.

“After the Worlds I’ll have a bit of a break then it’ll be training camp for the Commonwealth Games where hopefully I can beat that 4:18!”

We’ll be seeing Mark again at the London Six Day, the first stepping stone towards The Gold Coast. 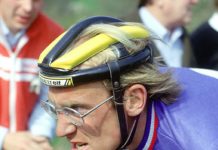 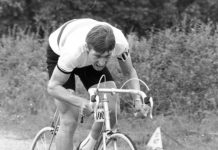 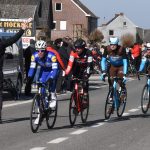 Diaries February 24, 2018
"Ooooohhhhhhh!" The moan echoes around the bar; these boys are aficionados, they all know that solid Astana Dane, Michael Valgren Andersen isn't coming back - he timed his jump to perfection, there was that fatal second or two of hesitation among the frozen men behind him and he was gone, en route to win Het Nieuwsblad 2018. 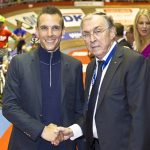 Six Days November 23, 2012
Contributor Steve Penny summarises the action for us from Het Kuipke (the little oval) last night, as we reach the halfway point in the Gent Six Day. The crowds filed into Het Kuipke in the thousands to meet friends, drink a beer or two and watch the 72nd Gent Six as it approached the all important weekend. Before the racing started it was announced that Wim Stroetinga was out of the race – for now - with a stomach problem. This would explain why he and partner Peter Schep had not been scoring many points over the first two nights.

Interviews September 30, 2010
We left our Tour of Britain 'catch up' with Evan Oliphant until after the British track champs, on the off chance that he might break the BC/Sky/100% ME grip on affairs - fat chance.