I parachuted in for the last night at Rotterdam Six Day where Gent winners Moreno De Pauw and Kenny De Ketele carried on where they left off – but instead of winning by two laps, they made it four…

Dominant for sure but no spectacle.

But I’ve whinged about that already.

We drove north for a couple of hours then parked up in a truck stop for what passes as sleep on the Six Day carousel.

Bremen is the next stop, an industrial city of more than two millions souls in Northern Germany. 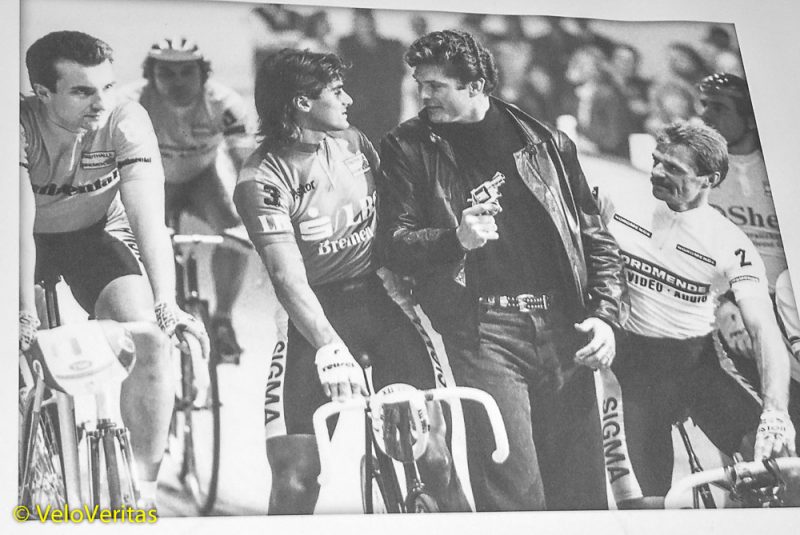 ‘The Party Six Day’ as it’s known due the fact that it’s run in the Bremen Messe (exhibition centre) where there’s every kind of alcoholic, musical and culinary distraction known to man to keep you away from the tight, atmospheric little track.

Within a spit of being the same size as Gent at 166 metres but with longer straights and vertiginous bankings.

The race has been run without a break since 1965; ‘recordman’ is Dutchman Rene Pijnen on seven wins, the last one coming in 1983 with big German pursuiter, Gregor Braun.

We have four previous winners in our line up; home boy Leif Lampater has two wins here of his nine win total off 84 starts.

His first win was with long retired countryman, Erik Zabel in 2009 and his most recent was in 2014 with Dutchman Wim Stroetinga in 2014.

Wim Stroetinga rides again and has three wins off 47 starts.

He was partnered by Belgium’s Kenny De Ketele who’s wins number 12 off 69 starts.

Stroetinga rides Belgian Robbe Ghys who we don’t think is strong enough for a podium.

Grasmann is paired with Jesper Morkov younger brother of QuickStep professional Michael and look worthy of a podium after night one.

We got off to a great start with Achim winning the opening devil, then the Derny then another devil – he’s partnered with fast Dutchman, Yoeri Havik and they were strong in the chase and time trial.

Initial trackside impressions are that apart from Achim and Yoeri; Messrs. Grasmann, Mørkøv, De Ketele and Kneisky all look relaxed.

The pits in Bremen are below a V.i.P. platform and have been specifically designed for boys my height to brain themselves – Christian Grasmann fixed me up with a Maloca baseball cap to protect my bald heid.

And like George McCrae says; “It’s Been so Long.”

Since we lead a Six Day that is… but Achim and Yoeri went top tonight – nice one!

They won the first chase and rode strongly in the big, late chase.

I had to hold up big Scottish sprinter, Lewis Stewart in the team sprint.

I’m so used to holding up skinny Six Day guys; dead casual, one hand – then you get a ‘brick-built outhouse’ like Lewis and you realise you’re not as strong as you used to be.

Thing is, Alphonso is ‘outta’ Detroit, Michigan – so how can he win a German TV contest?

But it must be noted; he is one BIG dude.

The big chase was conducted at a good lick and we had to feel sorry for our boy Moritz Augenstein who’s partner Jon-Andre Freuler – nephew of Six Day legend and 10 times world track champion, Urs Freuler – isn’t having a good race, missing more than one change tonight.

Grasmann/Morkov won the ‘big’ 45 minute chase then it was break time.

Mickey Krause was the entertainment tonight.

Doctor McCoy’s words came back to me; ‘It’s music Jim – but not as we know it.’

But the housewives of Bremen were certainly ‘getting down on it’ to his version of ‘Chirpy, chirpy, cheep, cheep.’

The sight of that camper van has never been so welcome.

The afternoon session is universally despised by riders and staff – it took two circuits of the pits by the organisers to get the boys out and on their bikes to start the show.

It’s a short programme, the rolling presentation then a devil, a chase and a Derny.

The ladies’ omnium kicked off with the scratch race, won by big, strong Dutchwoman Kirsten Wild, no surprises there.

Then a wee bit Scottish interest as big Great Britain representative Lewis Stewart took the keirin; I almost dropped him at the start; I keep forgetting that those sprinter boys are solid – but it didn’t unnerve him too much and he went long to win, nice.

I wonder what the pasta will be?

“Podi-odie-odie” I hope I got those lyrics right?

We have a 45 minute deejay spot now – it’s 11:30pm I should say and most riders and staff are fantasising about clean sheets and cosy duvet covers.

But Bremen has to live up to it’s “Party Six” reputation.

Boney M, ‘Daddy Cool’ hammers out as Rene Enders, the fastest first lap man in the world pops in for some pictures – so I snap one of those amazing legs of his.

Achim punctured and Jorg had to effect a rapid change – scratch one 60 Euro Conti Tempo.

Surprisingly, Kirstin edged the ladies omnium – there were only 47 points in it…

Dernys, then the time trial we don’t win.

De Pauw is quickest against the clock – but one look at the Belgian catapulting out of those bankings tells you whose gonna win.

The Europop is excruciating now; the deejay leads the communal chanting.

It’s fast. Kenny De Ketele clears off late, gets the gap, puts Reinhardt in and they make a feast of the victory celebrations.

The ‘balustrade’ sprint, a couple of keirins, washing, camper, sleep…

Read what happened in Nights Four, Five and Six in Ed’s Diary.

On the track Ollie Wood has been a consistent top performer with national team pursuit and scratch titles to his name as a junior in 2014. In 2015 he again was in the winning team at national level and added the European U23 team pursuit title. Last year he was on the European podium in both the U23 and Elite team pursuit competitions – bronze on both occasions. And this season saw gold in the Manchester World Cup team pursuit. We caught up with the now 22 year-old – his birthday was the week after the Gent Six Day finished – to discuss his 2017 season and his plans for 2018 and beyond.
Editorial

Not long after the loss of Andreas Kappes and Dieter Kemper the world of Six Days mourns the loss of another of the greats with the news that Denmark’s all time number two Six Day man, Gert Frank passed away on January 19th at the age of 62.
Editorial

It's easy to write an obituary when one of your heroes dies - probably more so if you don't know them well. There's just the legend, palmares, anecdotes and the sadness. But I knew Dimitri De Fauw, not well, but I worked at maybe half-a-dozen Six Day races where he was riding.
Diaries

The crowd is good, the riders' contracts have been paid, there's one more procession, one last picture of the Folies girls, I've polished the bikes of Jens and Franco Marvulli, most of the stuff is out of the big cabin, the strongmen are going through their routine and there's a buzz in the air.
Six Days

With the 'kid on' London Six Day just finished, we thought you might like to peruse the season 2017/18 Six Day stats. There were six races: London, Gent, Rotterdam, Bremen, Berlin and Copenhagen...
Diaries

Whether it's a great edition of the Gent Six Days or not, it's still quite an experience to walk up through the tunnel for the first time. Especially if the Dernys are up on the track droning out their monotonous tune, there's the buzz of a thousand conversations, the lights, the throng, the smell of beer, the renners flashing around the bankings, the people piled high up to the roof in the corners - We love it !

Team Barloworld's Colombian climber Mauricio Soler won stage nine of the Tour de France today, taking his fourth and most important victory of his short professional career. "It was an incredible win, something I never expected to achieve. But with some great team work it all worked out fine," Soler, 24, told reporters. The Barloworld rider was awarded by the new President of French Republic, Nicolas Sarkozy, who followed the race on the Tour de France director's vehicle.
Interviews

The Giro was a wonderful race, no question; but whilst it's charging across Italy everything else gets ignored - like the Scottish Road Race Championship, for example. The winner was - unsurprisingly - Raleigh's Evan Oliphant. VeloVeritas caught up with the man from Wick a few days after the race...
Ribble Weldtite Pro Cycling

Scottish rider Finn Crockett took victory on Sunday at the Rutland–Melton CiCLE Classic at Melton, sprinting clear of a small break of three other riders to take his first UCI road race win, with fellow Scot and team mate Stuart Balfour in fourth. Ribble-Weldtite DS Colin Sturgess takes us behind the scenes and into the team car to hear all about the strategy and build up to this unique event, and how the team executed the plan on the day.
Race Reviews

Maybe it’s our fault? Yesterday we said that ‘barring Acts of God,’ Cav would win. We got it half right; there was an almighty ‘Act of God’ with South African champion Robbie Hunter bouncing around the road like a rubber doll and a whole clutch of riders biting the dust. As the director cut to close up and what was happening at the crash site, there was Cav sitting on the tar, stunned. He’s a tough wee soul – ''stoic is the word, I think. Abbeville.
Diaries

There I was, sitting track side at the Copenhagen Six Day 2010 getting my copy up to date and the BlackBerry rings - Viktor. "I've just seen the stage from Qatar; Boasson Hagen punctured and the rest of them are nowhere to be seen!"
Interviews

British rider Joss Lowden who rides for Drops Le Col, on the sea level Derby track in England rode 48.160km in 60 minutes - 153m further than the current distance - in an ‘unofficial’ one hour ride and will be going for the official UCI record in Switzerland later this year.