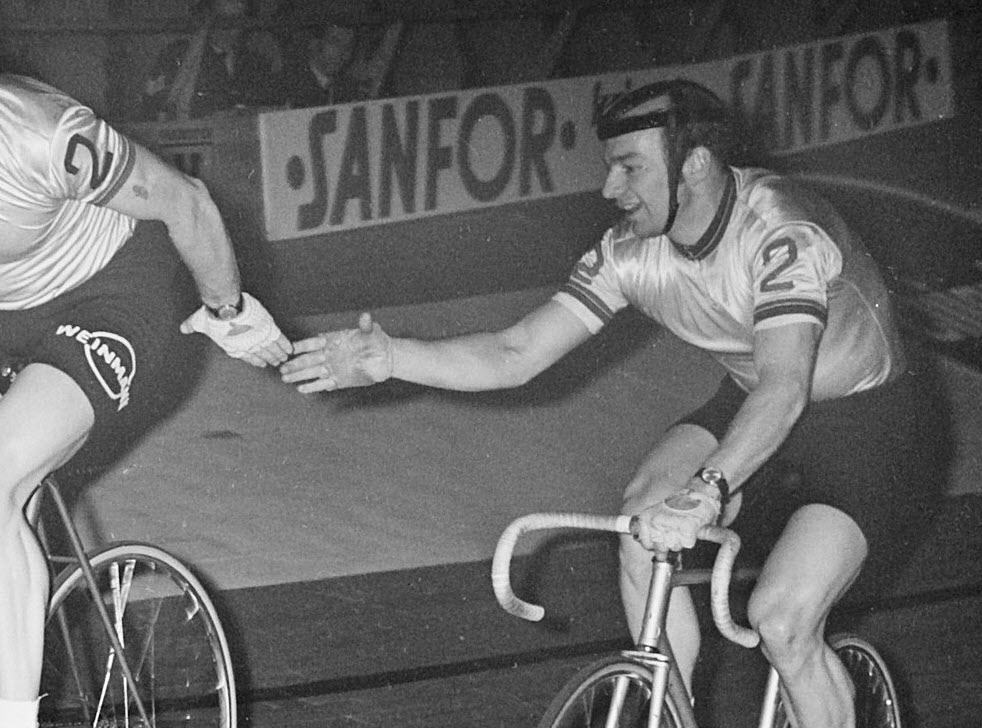 It was British former motor pace rider, Six Day and road man (his achievements have appeared in VeloVeritas ) Norman Hill who informed us of the passing of one of the Six Day Greats, at the age of 81 years; Dieter Kemper has left us.

“Today my wife and I received a call from Christian Kemper in Berlin informing us the passing of his father Dieter yesterday.

As many from the 60’s-70’s who watched Dieter compete on the tracks of Europe, Australia and North America will remember him as one of the most spectacular and hard working competitors.

From being a top German water polo player, and his first bike race, 18 months later he was a pro!

His record in the track is truly well documented along with a photographic and well written autobiography of his life as a competitor written by his son Christian.

What was truly magnificent about Dieter, he was always so willing to help others, and participate at an equal level no matter the age, ability and success of those around him.

He welcomed many to his home, mind you, when he won the “Worlds” motor-paced, his sponsor at the time, a Dortmund brewery gave him a lifetime supply of their beer.

He was a true all-rounder, from winning many Six Days when they were real Six Days – some may disagree!

To medals as a pursuiter at the Worlds, to European and German Championships and he even rode the Tour de France one year.

Being a newby to bike racing and only 18 months cycling under his belt, the director at the Westfallenhalle in Dortmund wanted a local lad in his Six Day.

Except, he was always falling off, he told me once his first 13 Six Days he fell off every day! Well, almost every day.

To the point that the “Blue Train” (the name given to the group of riders who ruled the Six Day tracks, ed.)- Rik Van Steenbergen, Rik Van Looy, Peter Post & Co. didn’t want him on the track with them.

He promised them he wouldn’t fall off so much and went on to win 26 Six Day races with a wide range of partners.

Dieter was one of the greats both on and off the track.”

There were also 30 second places and 25 third places.

He took two European (what would now be World) Championships in the Madison, one each with Oldenburg and Bughdahl.

He was also four times German Pursuit Champion and took two bronze medals at the Worlds in the discipline; kept off the top step of the podium on both occasions by gold medallist Leandro Faggin (Italy) and silver medallist Ferdi Bracke (Belgium) – two of best pursuiters the world has ever seen in the days when the World Professional Pursuit Champion was seen as cycling royalty.

As a ‘stayer’ behind the big motors Dieter was twice German Champion, six times European Champion and followed his bronze in the 1972 world title race with gold in 1975.

He also enjoyed success on the road with stage wins in the Tours of Germany and Switzerland as well as the Dunkirk Four Day.

A true ‘all-rounder’ and one of the all-time Six Day Greats.