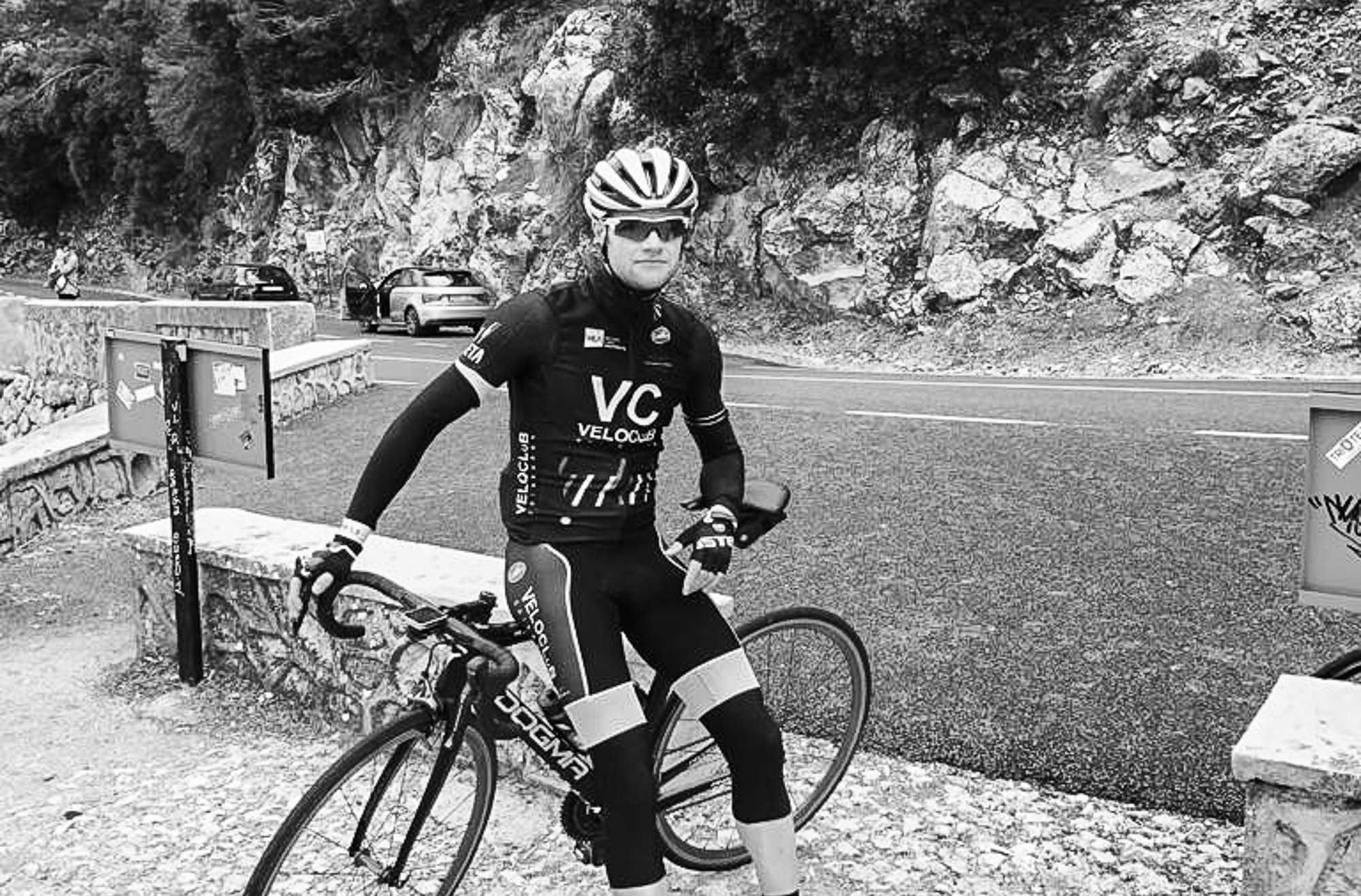 This is the least favourite part of having our own wee website; writing the obituaries of bright young men with most of their lives still ahead of them. This past week we lost Lewis Oliphant, perhaps best known for his exploits on the grass track.

At VeloVeritas we knew Lewis but couldn’t claim to know him well; what we’ve done then is to ask for people who were close to let us have their tributes.

“I knew Lewis for 15 years or so and he was a lovely guy, first and foremost. Quiet but clearly intelligent with a quirky sense of humour.

“Like many I was left stunned by the tragic news of his passing during the week.

“He probably lived in his younger brother Evan‘s shadow but that never seemed to bother him and he seemed happy enough of out of the limelight.

“He was however a very fine cyclist in his own right across many disciplines.

“Success didn’t come immediately like it did for Evan and he had to work hard over a number of years but he seemed to relish the hard training miles and the results did come eventually.

“He was renowned for being in fantastic shape all year round.

“I remember one time selling my old winter bike to him and I’m sure he probably put 10 times the miles on it than I ever did!

“He was certainly a stalwart of the Edinburgh and indeed wider Scottish cycling community and he will be sorely missed by all those who knew him. RIP Lewis.”

Richard Garrett is another friend of Lewis:

“Lewis Oliphant was a talented racer and will be much missed by all those who knew him.

“He started racing whilst a student in Edinburgh, initially focusing more on track than road.

“Lewis was a prolific competitor in the Scottish Grass Track and Highland Games scene, where he put his turn of speed and track craft to win multiple titles over the years.

“He was perhaps encouraged to race more on the road by the success of his professional brother Evan, and raced many successful seasons at club level, first with Velo Ecosse (alongside the likes of Jason McIntyre) and more recently with Velo Club Edinburgh.

“First impressions of Lewis could be deceptive, he might initially have seemed a quiet lad from the north of Scotland, but he would reveal a dry wit and sense of fun, and an endless enthusiasm for the bike.

“He will be sorely missed by the east of Scotland cycling scene, a rider who was taken from us suddenly and at far too young an age.”

David Andrew was a college friend:

“I first met Lewis at university in 1998; we were on the same chemistry degree course and shared the bond that we both came from Caithness – Lewis from Wick and me from Thurso.

“He introduced me to proper cycling, prior to that I was just, ‘a kid with a bike.’

“My involvement with road and track – I still remember those evenings down at Meadowbank Velodrome – was down to him.

“He helped me get my first real bike, a Giant OCR which set me up for the Edinburgh group rides.

“And perhaps surprisingly, as students on occasion we did partake of a few sherbets the evening before some of those runs but somehow we always turned up for them albeit we may have been close to legal alcohol limit for riding a bicycle.

“I left Edinburgh, moving down to England in 2005 but always kept in touch and caught up on my visits to Edinburgh.

“The thing that always struck me was just how much he loved cycling and it was wonderful how he shared that love with me, bringing into my life a lot of experiences and fun.

“My lasting memory has to be my wedding in September 2015 for which we ‘made a weekend of it’ with the wedding party staying in a hotel on Loch Ness side near Drumnadrochit.

“We were in the bar on the Friday evening when Lewis appeared – having cycled from Wick, putting us all to shame.

“His involvement with Kerry – who, unfortunately I never met – took him into cyclocross which was of course close to the Caithness Highland Games grass track race scene he was involved in from his youth.

“Cycling was a fundamental part of this compassionate man who had a passion for his chosen sport – his is a tragic loss.”

“I first met Lewis Oliphant back in 2007, I’d been given a Friday job at the Velo Ecosse bike shop to save up for my first road bike and Lewis was working the shop floor.

“I’d buy components one piece at a time, and Lewis would help me build them up, showing me all the essentials like routing cables, tuning brakes, bar tape.

“I totally loved this as I used to think he was so cool with all the best kit, clothes, was as skinny as a rake and look class on a bike – always tapping out a high cadence making hard times look effortless – so to this chubby 14 year old chopper, he was an idol.

“Hundreds of hours spent riding together ticked by as we became close friends, and looking back I am so incredibly grateful.

“For a quiet guy, he had a huge character.

“His bone dry wit was infamous among those close to him; he’d manage to get away with saying the most outrageous things with the most deadpan expression, wait for a hint of a reaction before breaking out with his wry smirk.

“Lewis loved a wind up with his mates, but his caring and generous nature is what he will be remembered for.

“He was a refreshingly genuine guy, not particularly persuaded by fads or crowds, he was always calm and focused. Don’t give him a drink though – the ‘loudest whistler in Wick’ isn’t so calming.

“Lewis and I first raced together for the Velo Ecosse-Montpelliers team.

“The night before stage 1 of the 2011 Tour Doon Hame we were in our hotel room checking out the race manual – Classic Lewis flicked straight to the prize money page.

“He managed to compare each classifications top prize to a pay day from a Highland Games grass track event. I mean, why bother getting first team in a 4 day race when you could just win the Halkirk 800m?

“Lewis was a class act at Grass Track racing, numerous Scottish titles, and I actually think Lewis was the first person to ever use a carbon race bike at a highland games – one for the history books?

“Lewis went on to be a stalwart of the Velo Club Edinburgh, where he was officially crowned as one of the Units of the Bunch.

“Paul had his own name for Lewis, though – “The Benchmark” – because you know you’re fit if Lewis is finding your pace tough, not a bad nickname to have! Lewis has been a constant of the Edinburgh riding scene over the past decade, even so when his kids came along.

“He’d describe how hard a training ride was by saying “Garret had his pinkies out”, referring to the way Richard holds his bars when he’s ‘on the rivet’.

“Richard doesn’t need bottles on the Saturday morning rides – he drinks his own sweat” was another one I distinctly remember him saying several times.

“Sometimes I did start to wonder though.

“Only a couple of weeks ago he had people in fits at Scott & Sarah Wardlaw’s wedding when he asked Richard Garrett’s wife, Denise “What’s it like to be married to God?” – that dry wit, again.

“Only upon having to reflect upon our time together have I realised how much of an impression Lewis had on me.

“He was one of the first friends I made in the sport, and has been there ever since.

And a final tribute from Lewis’s younger brother, Evan:

“Lewis was more than just my big brother he was a good son, father to two amazing children and a great friend to many people.

“A lot of his life was taken up with one of his greatest passions – cycling.

“He always had the latest and best equipment and knew how to get a good deal.

“More recently he’d had some tough times but this last year he had met someone so very special to him (Kerry); she shared the same passion and drive for life and we could all see how happy she made him.

“The news of his passing has devastated so many lives.

“He was taken far too soon but we are so glad he met Kerry as we will all remember how happy she made him in the final year of his life.”

Tour of the Campsies 2021 Goes to Chris Smart

The 2021 Tour of Britain in Hawick