He’s been CTT 10, 25, 50 and 100 mile champion, he’s been British 25 and 50 mile record holder; he’s been away but now he’s back. When we saw he’d recently won the Eddy Soens Memorial Race some 20 years after he’d first won it, we thought to ourselves; ‘maybe need to have a word with old Mister Matthew Bottrill, aka ‘The Flying Postman, it’s been a year or two since last we chatted’.

But then, when we saw he was very much involved in Belgium’s European Time Trial Champion, Victor Campenaerts’ forthcoming Hour Record bid our ears really pricked up…

‘Welcome back Matt’ – and in some style!

“I’ve not really been away, 2015 I just reached the pinnacle of the sport, I knew I had mentally reached my limit and set my coaching company up mattbottrillperformancecoaching.com and everything went mental.

“At the end of 2016 I decided to make a comeback to cycling. I learnt what I needed from triathlon and just did not have the time to commit.

“Then Tim Don set the Ironman World record and I was like, ‘‘Wow! Nothing can get better than this.’

“So I set about training for cycling again that winter but unfortunately I was knocked off my bike so spent most of the season trying to rehabilitate.

“Then I went out to Kona (home of Ironman triathlon, ed.) last October and I was doing a ride with Tim and realised I wanted to return, we had just done a three week training camp and I could see how fit I was getting.

“So from that point I started to train hard.

“The Soens is a very special race for me; it was my first win and set me on my career to becoming a great cyclist, I was only 20 at the time.

“So to come back and win in style 21 years later is a very special moment.”

You last won the race in 1998 – tell us about the differences over two decades.

“I’m a lot smarter these days.

“Man, if I knew about training and aerodynamics my path in cycling could have been very different back then.

“While I won a lot on the road I could have won loads more.

“But I have no regrets.

“I’m now doing the job I love and from my many mistakes I am able to pass this knowledge onto others.”

That’s a very a slippery Giant you’re mounted upon – but no ‘oversize’ derailleur rollers – I thought they were a ‘must have’ for the modern fast man?

“There are ‘for’ and ‘against’ arguments for them – the rolling resistance you save they generate around the same drag.

“Also, Ceramicspeed are no longer a sponsor so there’s no real need.”

I see you have some nice team sponsors there, Matt.

“Well, most have been with me for years.

“Giant UK: have always given me massive support and it’s very much a big family.

“The marketing lady, Collette Beasant is somebody I always turn to for advice; I really value her opinion and was the first person I went to when I set up my Team Bottrill.

“They all think I’m bonkers still wanting to smash it out after all these years.

“Endura Clothing: we have an amazing relationship and have grown together from the days of Drag2zero

“Enve Wheels: again, these guys have been with me since 2011 when I started my work with Simon Smart.

“Secret Training Nutrition:  we wanted to advance our coaching even more so I turned to Tim Lawson at the start of 2018 for advice and support

“Continental Tyres: only the fastest rubber (Trust me I love all the marginal gains) GP5000 tubeless, wow!

“Cyclone: for all our team cleaning products.

“Cyclepowermeters: I’m still coached by Bob Tobin, he’s always been there for me. While I could coach myself I love having his support

“Vanguard Engines: A great relationship with a desire for speed and technology.”

Where have you been, this last year or so?

“Rehabilitating with my back – but I never stopped riding.

“I think the time away did me some good, I’ve really found a love for my cycling again.”

How goes the coaching business?

“We work with a number of different athletes from people wanting to get up hills faster to athletes wanting to smash world records.

“We have seven coaches.

“I’ve always been obsessed with getting results so limit the number of athletes our coaches take on. That way we can guarantee success.

“We also have our own bike fitting services which is a massive part of our business.”

What about your postie gig?

“Basically when I launched the business In October 2014 everything went crazy.

“I loved that job. But my desire was always to become a Cycling coach.”

Will we see you back against the watch in 2019?

“Yes maybe not at the Nationals, I think I want to remember the winning.

“Anything I do now would be a step back.

“While I’m going well the power I had then was a whole different level.

“But my main focus is the Gran Fondo masters world champs in Poland.

“But I will ride a few domestic TTs and definitely the team trial that’s a goal for the team.”

Your association as an adviser with Lotto-Soudal, how did that come about?

“Yes, that started with a few beers in Kona, at the Ironman world champs.

“I was staying with the Zwift academy with Tim Don and they had an open house one evening.

“Richard Meleck from Zwift made an introduction and we just hit it off and exchanged numbers.

“Apparently Victor Campenaerts is a hard guy to please and was impressed with my knowledge.

Tell us about your work with Lotto.

“I started working with them in Mallorca at their training camp. Kevin De Weert invited me along and said he wanted to see if I could do some track testing with them.

“So straight into the deep-end, the riders I worked with were Tiesj Benoot, Tim Wellens and Brent Van Moer.

“They all made some series gains and were impressed.

“Since then I’ve been doing more aero work and planning some of the pacing plans along with Kevin.

“He’s a good guy and it’s an awesome process working with the guys.”

Campenaerts and Wellens both winning time trials at a high level; that must be satisfying for you – can you tell us about the improvements to recommended for them?

“They have massive support from the team so I just add in my advice with pacing and how I would ride the course with speed, power and aerodynamics.

“Then Kevin adds the finishing touches to his planning and relays the data to the athletes.

“But yes, two World Tour victories so it’s going well. Neither had won a time trial before, so I think we are on the right path now.

“Kevin always videos the races and – trust me – he knows how to motivate the riders. Gives me a massive buzz watching them.”

How did the Belgian riders react to the, ‘English guy’ suggesting they do it his way?

“Providing I show all the data and reasons why we should make changes they have been really open to suggestions.

“I’m not going to lie when I first went to the camp with 30 riders and all the support staff I was bricking it!

“But I’ve always been myself and they seem to like my way of working.

“It’s just about bringing in small changes and then working together to find more.

“It’s a massive team effort and I feel part of something very special.

“That’s what motivates me to try and find more gains for them.”

We’ve seen pictures of Campenaerts Hour bike – do you know what gearing he’ll run – and will they be ‘doing a Wiggo’ and ‘running the chain in?’

“Ha ha, that would be telling!

“But yes, the team have calculated everything.”

Will you being going to Mexico with his entourage?

“No. I’d love to but we have our MBPC training camp the same time in France with 20 athletes and three coaches and I need to be there to support them.”

Can we ask for your prediction of what he’ll achieve?

“Yes, I believe he will break it.”

Hour Record advice apart, what’s 2019 about for you?

“I just want to keep my love for riding and racing.

“I plan on doing loads of different stuff.

“I won’t be putting the pressure on myself like I used to, I’ve done everything I’ve set out to do so now it’s time to have fun.

“The main goal for me is to keep the standard of our coaching at the highest level keep supporting our athletes.

“But I just can’t leave racing – I love the process, the build-up to a key race; there’s nothing like leaving the starting blocks knowing you’re flying.”

We look forward to seeing how the season develops for Messrs. Bottrill and Campenaerts. And always nice to speak to Matt. 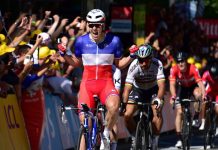 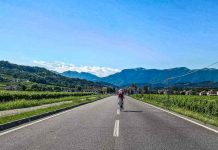 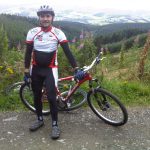 Nuggets August 24, 2009
"B & Q car park, Livingston; got me diet Coke and tuna roll, time to settle down and read about Russell's great win in Ireland. I scan "The Guardian" sport section three times - no dice. 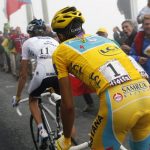 Diaries July 22, 2010
'Andy talks tough !' say the headlines, he did try his best yesterday, his men used whatever was left to drive up the lower part of the Col du Tourmalet - then he went for it. However, not for one moment did it look like Alberto Contador was under pressure.