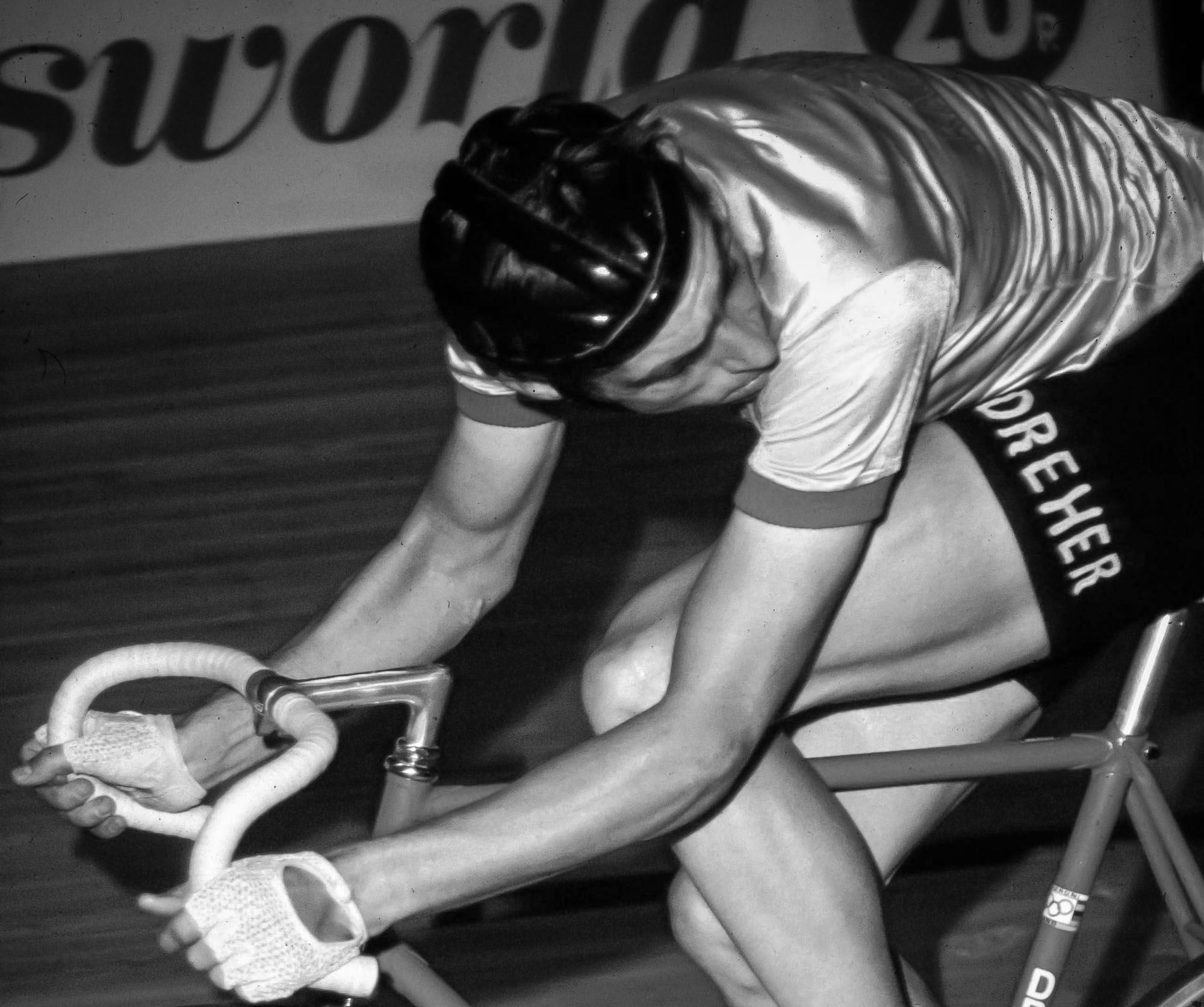 Born June 27th 1944, Sercu was always going to be a star; his father Albert was a prolific professional kermis winner and no mean road man winning Het Nieuwsblad, Dwars Door and Nokere Koerse in a pro career which lasted a dozen years.

Young Patrick was being groomed to win bike races from an early age, his first appearance on the palmarès websites is in 1961 as silver medallist in the Belgian Sprint Championship behind Valere Frennet; Sercu was but 16 years-old.

He came a back a year later to win and by 1963 was Amateur Sprint Champion of the World.

He turned pro in 1964 on the back of winning the Olympic Kilometre title – remarkably, on the way to which he won the amateur Kuurne-Brussels-Kuurne and Gent-Wevelgem.

In 1965 he was wearing the Solo Superia colours with long term madison partner, team mate and friend, Eddy Merckx.

He made the pro sprint worlds final but lost out for gold to Italian hard man, Giuseppe ‘Joe’ Beghetto.

But season ’65 also saw his first win in the discipline he would dominate for the next two decades – the Six Days.

Fittingly, Gent with Eddy Merckx was his first triumph – another 87 wins would follow with 1966 seeing more Belgian titles and Six Day podiums.

In 1967 Sercu joined Flandria De Clerck and took his first pro rainbow jersey, in the sprint with ‘Joe’ having to settle for silver.

Reunited with Merckx at Faema for 1968 it was his old tormentor, Beghetto who won the sprint – in Rome…

Meanwhile the National and European titles piled up, as did the Six Day podiums.

His second and final professional rainbow jersey came in the pro sprint in 1969.

Italian beer company Dreher’s lovely red and white strip it was for 1970 and his back was turned on the summer tracks as he pursued a road career – very successfully with stage wins in the Tirreno, the Giro and Tour of Sardinia, taking the overall GC in the latter.

Still with Dreher in 1971 there were two more Giro stages (he would win 14 in total) and a Romandie stage win whilst the Six Day onslaught continued.

His third year with Dreher saw more titles, more Six Day wins, a stage in Tirreno and victory in the Championship of Flanders.

For 1973 the jersey became even cooler – Brooklyn, with a Giro stage and Six Day wins in Dortmund, Gent, Grenoble, Cologne…

One of his best seasons was ’74 with Brooklyn; three Giro stages, three Tour stages (six in total) and the green jersey.

We saw him ride a post-Tour nocturne in Concarneau, that year – legs the colour of teak, green jersey, matching patent leather black and white shoes and helmet astride a beautiful Gios – ‘cool’ doesn’t do him justice.

The Circuit of the Port of Dunkerque came his way in 1975 along with stages in Sardinia, Romandie and the Giro.

There were more titles and stage wins in Sardinia and the Giro in ’76.

Back with Merckx for ’77 at Fiat he had another magnificent year with two Paris-Nice stages, three Dauphine stages, three Tour stages – including one from an epic solo breakaway – and his biggest single day success, in Kuurne-Brussels-Kuurne.

Needless to say, the titles and Six Day wins also continued to pile up; he won eight Sixes that season.

Marc Superia was the team for 1978 and his road commitments began to take second fiddle to his winter exploits – Berlin, Frankfurt, Munich, Grenoble just the ones he lifted the winner’s bouquets in, without mentioning his podium places.

In 1979 he again won eight Six Day and there was a Tour of Belgium stage win and another big single day win in the GP Union Dortmund.

Still with Marc for 1980 there were seven Six Day wins.

For 1981 he was sponsored by IWC-Eddy Merckx and there were another five Six Day wins – and five in 1982 with the relentless accumulation of titles continuing.

His final year, 1983 sponsored by Neuhaus he won two Six Day with his last win coming in Copenhagen.

In the text above we mention ‘titles,’ he won 59 during his career:

Sercu was also a world record holder at 500 metres and 1,000 metres as an amateur and professional.

After his career as a rider he became Belgian National Track Coach before moving in to Six Day race direction; a role he performed at Gent until recent years when his failing health meant he had to take a back seat to his son, Christophe.

A year or two ago at the Gent Six, Patrick was wearing his usual worried frown – Eddy Merckx was guest of honour that night, he climbed up to the timing/officials area, grabbed Patrick in a bear hug and whilst I don’t know the exact words, I believe they may have been; ‘give me a smile you old Fleming, you!’

Patrick’s frown disappeared, he burst out laughing, hugged Eddy back, the two men cuddled, smiled and chatted – joyful to behold.