In 1978, Sean Kelly won Stage Six of the Tour de France whilst Stephen Roche opened his account in 1981 by winning the Tour of Corsica.

It was 1992 when Sean Kelly closed the book with his stunning second victory in Milan-Sanremo.

The only ‘majors’ which escaped them were the Dauphine and Tour of Flanders.

And, ‘cometh the man, cometh the bike race,’ to feed the hunger of the Irish public, desperate to see their two mega stars in action the Nissan Classic was created, bringing the world’s best riders to the Emerald Isle; Kelly duly obliged by winning four of the eight editions.

Apart from the nation of their birth and talent, the two men have another common denominator; they were both managed by Dubliner, Mr. Frank Quinn.

I caught up with Frank to get the low down on 80’s and 90’s pro cycling wheeling and dealing.

Did you have a background in sports management, Frank?

“No, I was in publishing but I had a good record in selling and dealing with big companies.

“My work for Sean Kelly was my first experience of working in cycling but it was a great time to be involved in Irish cycle sport with Sean, Stephen and the Nissan Tour.”

You looked after Sean and Stephen Roche; the media was always keen to play up; ‘Sean the reticent country boy’ contrasting with ‘Stephen the Jack the Lad city slicker.’

“I wasn’t as flamboyant as some of the cycling agents but whilst Sean sometimes took a while to come to a decision he listened to my advice.

“And once you made a deal with Sean that was it, 100% – whether in business dealings or in a bike race situation, a deal was a deal.

“Jan Raas reckoned you could always do a deal with Sean.

“Stephen was a different character, much more open to outside ideas, he’d change his mind and that would get him into difficult situations which took a bit of sorting out – an example of that is his riding for Carrera with Peugeot on his shorts because he’d broken his contract with the French team.

“I had problems too with arrangements made then changed about what shoes, helmets and glasses he should be using.

“He would take advice from folks which wasn’t always in his best interest; for instance he opened a boutique on Dublin’s prestigious Grafton Street, it failed and he lost 100,000 euros – you can’t afford to lose money like that, especially when it’s so hard earned.

“Perhaps folk didn’t realise it but there was rivalry between the two; the one didn’t want the other eclipsing his star; but that’s normal, you see the same thing with the rugby guys.”

But it wasn’t just Sean and Stephen you represented?

Martin had some nice results; a Tour stage, a Giro stage and two stages in the Pais Vasco.

“Martin accepted his responsibility as a team player, he knew he was never going to win the Tour de France but did his job, was careful with his money, got himself a house and set up a business after his cycling career ended.”

We interviewed Conor Henry, he rode stagiaire for TVM but that was as far as it went…

“I organised that ride with Cees Priem of TVM who was always a good guy to deal with.

“Conor was class with that slim athletic build he had but I felt he wasn’t totally committed, when he was racing he was selling cars, you can’t allow yourself distractions like that.”

What were Graeme and Robert like to deal with?

“I liked Graeme, I still do.

“He was a colourful character with his training on a postman’s bike with two stone weight in a bag on his back and all of that stuff.

“Perhaps your readers have forgotten that he was twice World Pursuit Champion – in 1993 and ’95.

“That Hour record of 52,713 kilometres he set in 1994 on the Bordeaux track… he told me that the last five to 10 minutes he was on “on automatic pilot,” he could only see the line on the track.

“He extended his pain barrier – he was some man.

“I arranged that deal with Scotoil in Aberdeen and he always paid me; but I have to confess to be disappointed about what happened with Le Groupememt, I got him a good contract then he didn’t turn up.

“That stuff in his book about having to take drugs and that’s why he left was a load of bollocks, how could they ask him to take drugs when he was never there?

“He didn’t want to be away from home for six months at a time, that’s the fact of the matter.

“Robert could be a difficult man, you shouldn’t be telling journalists to, ‘F off’… but he was always fine with me – always taking my calls and always with time for me.

“He was very close to Sean and Stephen, he saved Stephen’s Giro for him after the carry-on when Stephen usurped Visentini; Robert went with Stephen to Fagor the next year.

“But let’s not forget that Robert was fourth in the Tour de France and the King of the Mountains, second in the Giro and twice second in the Vuelta – a great rider.

“And I have to tell you that I never handled any rider that I didn’t get along with, I did their insurances and handled other personal business for them to.”

Fagor – that team didn’t have a good name.

“Stephen, Malcolm, Robert, Paul and Martin were all there but it wasn’t a professional set up; ‘bag men’ I called them, bags with wads of cash in them and the situation with management was complex and political.

“Agustin Mondragon was the head marketing man with Fagor – which was a white goods company in the Basque country – he was too involved in the running of the team and it all became very messy and unprofessional.

“When we placed Malcolm with Teka – another Spanish white goods company – there was none of the ‘bag’ stuff, it was all very correct and professional.”

In general were the teams good to deal with?

“When Sean went to PDM – the team was sponsored by Philips Dupont Magnetics, a joint venture between the electronics company, Philips, and the chemical company, DuPont – it was all very professional.

“But mind you, the contract wasn’t signed until the team launch, Sean held out until he got what he wanted,

“He did the same when he signed for Festina, he wouldn’t budge until his demands were met.

“I’m not sure there’s many guys would have the strength of will to hold out like Sean did.

“But PDM wanted him, they needed someone on that podium in the Tour de France, they weren’t concerned about the colour of the jersey, as long as PDM was on the podium – 50% of their year’s PR came from the three weeks of the Tour de France.

“And they liked Sean because he would also get them results from February right up to October.

“But you know that Sean would have stayed with Kas until the end of his career; the man behind the Basque soft drinks company, Louis Knorr was bike racing mad – he and Sean were very close – they used to go hunting together – but Knorr died in 1988 whilst Sean was riding the Tour de France and that was the end of the team.

“Sean was happy that he’d presented Kas with the Vuelta win the sponsor wanted so much, before Knorr died.

“And as I said, Cees Priem was a good guy to deal with, very straight in our dealings when Robert Millar signed with TVM.”

You were an agent for rugby players too, how does that world compare to cycling from an agent’s perspective?

“Like cycling, that sport has change a lot in the last 10 or 15 years, there’s much more money in it, especially where the French teams are concerned.

“I had Sean do some talks to the rugby lads about commitment to your sport; they looked at him as if he had two heads when he told them about the training he did.

“Then he explained about the eight days from The Tour of Flanders to Paris-Roubaix, how he’d finish Flanders on the Sunday then jump in a private plane to Northern Spain, ride – and likely win – the Pais Vasco then fly back and ride Paris Roubaix the next Sunday.

“The rugby guys couldn’t get their heads round that harum-scarum stuff at all.

“Then there’s the aspect of, ‘having a drink,’ – the rugby lads like a beer after training and after the match.

And that’s why he was ‘King Kelly’. With thanks to Frank for his time and great insights. 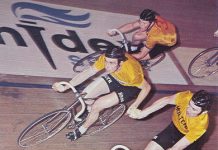 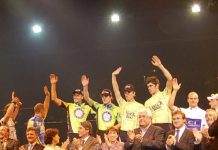 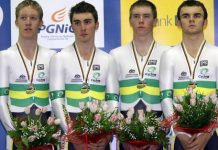 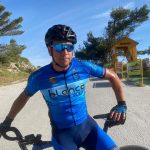 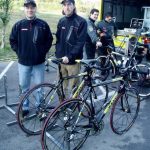 Diaries January 21, 2007
"Everything is good?" I say to the bonnie Spanish lass who checks the Yaris back into the hire-bay after the Saunier Duval Team launch; "Yes, have a good trip," she smiles. "Thank you", I reply, patting the trusty can of cutting-compound in my bag as I skip towards the terminal. She wouldn't have said that if she'd seen it after the boy skelped it with the Jeep on Tuesday. 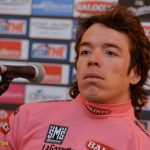 Race Reviews May 22, 2014
Time tests, love them or hate them – but this one was a cracker. I had Evans down as winner after it became apparent that Adriano Malori was ‘just getting round’ after his crash the day before. I had it in my mind that Ulissi might do something but thought his stage 11 crash would put a lid on his ambitions. Far from it and Lampre's new star lead for a large part of the afternoon until Rigoberto Uran jarred all of our eyes open – including Ulissi’s as he sat in the ‘hot seat.’