In recent years the ‘Big Two’ of Team Pursuiting have been the Australian and GB teams; but back in the early to mid-70’s the nations to beat were bitter rivals East and West Germany.

Not just a clash of jerseys but a political and ideological battle; Eastern socialism v. decadent Western capitalism.

Both teams enjoyed a high level of Government support.

However, on their day a group of under-funded but driven Englishmen could challenge that German domination.

Recently we’ve interviewed three of the gentlemen who were in those teams: Ian Banbury, Rik Evans and Mick Bennett.

We’ve caught up with another of the group, Mr. Ron Keeble who was in the Munich team which took Olympic bronze in 1972.

We kicked off by asking Ron if, had he been in the squad in ’73, he would have surrendered the rainbow jerseys as the GB team did.

In the Team Pursuit final the West Germans were ‘up’ on GB and seemingly headed for victory but hit a trackside official, crashed and failed to finish three men.

GB had won, the Germans were DNF but GB didn’t challenge the West German appeal that they had been ‘up’ at the time of the crash and had a commanding lead.

Had GB challenged the appeal they would have been world champions.

Evans thinks they made the right decision, Bennett doesn’t.

“Would I have let the rainbow jerseys go?

“West Germany were DNF, the rules are the rules, they didn’t finish.

“In Munich in the semi-finals we were up against the West Germans and riding very strongly.

“The Germans had re-shuffled their team and brought in a former East German rider, the other three weren’t happy with the decision and they were a very tense group.

“The Germans started fast but we pegged them back; Willi Moore and Ian Hallam were very strong, they could ride on the front all day but Mick Bennett and I were fast finishers and I’m sure we could have won that ride.

“I always remember Eddie Soens shouting to us from trackside; ‘they’re cracking!’

“But Willi punctured and in the worst position, second in the line. Technically we should have been awarded a re-run because the puncture came within the first two kilometres but the officials wouldn’t have it.

“In the ride off for bronze we were faster than the East Germans were in their silver medal ride.

“Perhaps we wouldn’t have beaten the East Germans to gold if we’d made the final but I’m convinced it should have been us up there riding for gold.”

You won the White Hope Sprint in ’66 but chose not to pursue the sprinter’s path?

“No, but even before that I’d taken bronze in the Junior Sprint Championship at the Kirkby track in Liverpool.

“I’d had gastroenteritis the week before so wasn’t at my best – but the guy who won, Pete Jenner was head and shoulders above the rest of us.

“However, Eddie Soens said to me at that meeting that I had the potential to be a top sprinter.

“But I used to watch the distance races at Herne Hill track and my heart was set on riding the big Scratch Races of the day.”

Munich wasn’t your first Olympics, you were in Mexico in ’68 for the Team Pursuit.

“We had a fantastic team there; Ian Hallam, Harry Jackson, Ian Alsop and me.

“But the problem was that they only sent a six man team so riders had to ‘double up’ and Ian Alsop had ridden the Sprint competition the day before.

“Normally that wouldn’t be a problem but in Mexico it took so much longer to recover with the thin air and Ian was dying in the Team Pursuit.

“I remember him laying on the grass after his rides, gasping for oxygen.”

You were in the GB Team Pursuit team in ’71 too?

“Yes, we had Dave Lloyd and John Patston but it wasn’t what you would describe as a ‘knit’ team; Norman Sheil was coming in as coach but Tommy Godwin, the manager and Norman didn’t get along and there were disputes about how we should ride, who should do whole laps or half laps.

“It wasn’t until Willi Moore came in to the line-up that things began to gel – Willi was the Ed Clancy of his day, just so strong.

“Willi and Ian Hallam were the powerhouses whilst Mick Bennett and I were the fast finishers.”

Mick Bennett said that you, Willi Moore and Ian Hallam were the ‘Big Three’ – how did the team come together for Munich?

“Back then you had to forego races to attend ‘trials’ for the selectors to decide on the team selections.

“After the Worlds in ’71 when Willi came in we knew we had a proper team with four real trackmen.

“Coming in to Munich we had no real manager there was still animosity between Tommy and Norman with the latter away at the GP William Tell in Switzerland with the road team prior to the Games so we just got on with it ourselves.

“Ian Hallam’s brother, Stuart was there to help us, blow up tyres and rub Radian B on our legs but we were all on different bikes and had to buy our own tyres.”

You’ve explained what happened in Munich ’72 – it certainly seems you were worth at least silver in that competition?

“I remember riding against – and beating – the East German guy Richter in a 10 mile scratch at Nottingham subsequent to the Games; he said that he and his team mates were watching the semis and thought that they’d be meeting GB in the final.”

How much support did you get from the British Cycling Federation?

“Very little, at the Mexico Games we had no mechanic, I still have the letter telling us to bring three pairs of wheels and which chainrings we should take.

“My mum and dad had to pay for my tyres.”

You stopped riding internationally after ’72.

“I had a full time job and was married with a baby daughter, I had debts coming out my ears and whilst I had a sympathetic boss, he had to deal with my work mates complaints of ‘how come he gets time off?’”

But you came back with the 34 Nomads domestically?

“The organiser of the 1977 Good Friday meeting invited me to ride so I started training and won the Golden Wheel 10 kilometre Scratch from Tony Doyle and Dave Le Grys.

“In my ‘heyday’ I tried to win that race a number of times but never succeeded; I won all the classic distance races in the UK, except the Muratti Cup but every time I went up to Manchester to ride it the meeting was rained off.”

You became a ‘tester’ too latterly and were pretty quick.

“Those were done in those ‘pre aero’ days – I liked time trials because you could do your race early then get home to have the day with the family.”

You were always a Geoffrey Butler man when it came to your machines?

“I found my first bike on a bomb site my dad had to weld it to get it rideable; I built it up with second hand equipment.

“My first ‘proper’ bikes actually had A S Gillott frames.

“I joined the 34 Nomads and remember being down at Herne Hill and watching the late Roy Cromack win the 1964 British 10 Mile Championship; ‘that’s what I want to do,’ I remember thinking.

“It would have been nice to have a coach though, to tell me what I was doing wrong.

“I did get offers to turn professional though, first with Clive Stuart in the late 60’s and then again after Munich.

“I spend most of my time in Spain these days and get out on the bike most days so I can’t complain.”

As with Messrs. Evans and Bennett, a privilege to speak with a legend of British track cycling. 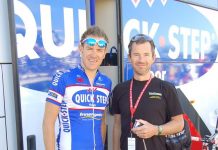 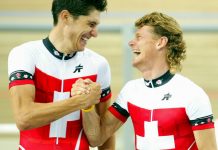 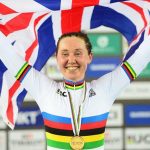 Interviews May 9, 2017
Once again we’re proud to bring you an exclusive interview with Olympic Team Pursuit Champion, Katie Archibald where she tells us about her latest triumph, in the World Omnium Championship – and puts us chauvinists at VeloVeritas securely in our box! But we still respect and love the lady. 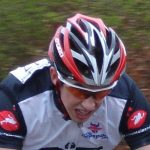 Interviews November 17, 2008
We all dream about it (or have dreamt about it) but 20 year-old South Quensferry man, Ross Creber has done it-put pen to paper on a pro contract, with Plowman Craven. VeloVeritas were on the phone, before the ink was dry... 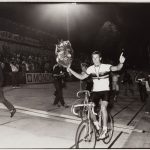 Interviews May 28, 2019
The pursuit race is the ultimate battle of man against the clock and, in the end, man against man. Once upon the time the pursuit champion was the king of the boards and everyone would know his name. Australian Steele Bishop was one of those men of the '80s.