There may not be u23 racing – or any other kind of racing – taking place in the UK but there certainly is in Europe.

Flavio Zappi’s boys are in full effect in la Bella Italia and Scotsman Calum Johnston is turning the pedals in anger in España.

And the man who won the XLIII Memorial Cirilo Zunzarren in Estella-Lizarra, Navarre, Northern Spain where Calum finished 14th recently, was an Englishman; 21 year-old Toby Perry from Ashford in Kent, by name.

We’d spotted Toby had previously finished second in a Spanish race this season, the Trofeo Joan Escola; he’s currently in Girona but will soon be moving to Huesca in Aragon, North West Spain – time we caught up with this young gentleman…

Congratulations Toby, tell us about your victory, sir.

“Unusually for Spain it was flat but with cross winds and pure pain for the first hour – then it was up and down to the finish.

“The big teams, Lizarte – that’s the development team for the Equipo Kern Pharma UCI ProTeam – and Laboral pushed on in the hills whilst I contrived to miss a corner and had to do a bit of gravel riding and cyclo-cross bike shouldering to get back on the race route – but I got back and clawed my way up to the front group.

“I was in a move with Calum Johnston with at 50 K to go but it came back then I got away with Pua Miquel Delgado from Lisarte – he’s a strong guy with two podium places in races already this year, prior to this race – we attacked each other but it came down to the sprint where I got the better of him.”

And a second place the week previous in the Trofeu Joan Escola?

“I was on a good day for that one, I was away but caught with 30 K to go then went away again, got caught but still managed second in the sprint for the win.”

How did you get into the sport in the first place?

“I was about 16 year-old and I didn’t have much choice, I was originally into rugby but my mum – who’s a cyclist – bought me a ‘cross bike and entered me for the Rapha Super Cross – which I hated every second of!

“I had a year away from the bike then rode another ‘cross and began to enjoy it.

“I finished school and made sure that I had the necessary exam results to get in to university if I want to take that direction when my cycling days are over.”

“As a junior I won the South East Regional Championships, I got third in a stage in the Tour of the Mendips and won a kermesse in France.

“I haven’t actually raced u23 events in the UK; my first year I went to Belgium then last year was Covid and this year I’m in Spain.”

And I get trouble from Jos Ryan if I don’t ask; are you a Dave Rayner Fund Man?

“I first got support from the fund in 2019 and it’s been an amazing help, taking a lot of pressure away from me.”

Why Spain rather than say, France or Italy?

“The main reason is that my Belgian team folded unexpectedly and I frantically messaged every team I could find.

“I got two responses, one from The Netherlands and one from Spain – and here I am!”

Team La Tova Asesoria Amudevar, is it a good set up?

“Yes, it’s run well and we have decent sponsors; I’ve still got to get my bike, a Sabato – I had one last year but broke it in a crash – so I’m racing on my four years-old training bike.”

Spain has a name for there being plenty of hilly and mountainous stage races but not too many single day races.

“That applies at the top levels of the sport but not at amateur/u23 level; there are plenty of one day races in the early season; our stage races will come in the summer.”

How’s the Covid situation there and what are your thoughts on the dreaded ’90 Day Rule?’

“At the moment it’s not so bad; you’re meant to stay in your own city but being with the team I have the relevant documentation to enable me to travel – but you have to undergo regular temperature checks and wear a mask.

“I’m not affected by the ’90 Day Rule,’ I applied for Spanish residency, last year and have a Spanish licence.

“If I had an English licence then I couldn’t race here as they’re restricting foreign riders from traveling to Spain to race in light of Covid.”

“I spent it here in Spain in the apartment I shared with my Polish team mate.

“I did a lot of Zwift races, as many as three each week, they helped kept me sane!

“I did my training on the turbo on the veranda in the evening at 8:00 pm, it was just too hot during the day.”

“Team management have told us not to pay attention to the race calendar with races getting cancelled – but we’re racing this weekend, 27/28 March and then in Durango, the week after that.”

What goals have you set yourself for 2021?

“But I’ve done that now!

“Now I want to keep getting good results with the ambition of stepping up to a UCI Continental team, if possible.”

Good to see a young man ‘just doing it,’ we wish him well and will be keeping an eye on those Iberian results. 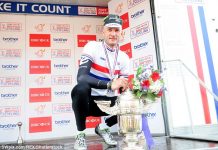 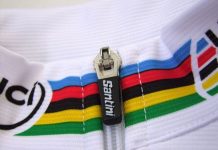 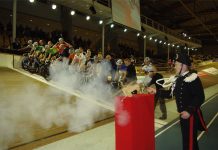 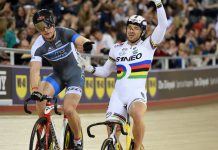 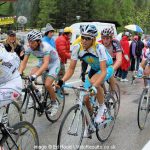 Diaries May 25, 2008
"The best laid plans of mice and men gang aft aglay," Rabbie Burns must have had a premonition about the Giro when he wrote that. It should have been a short hop over the Pordoi Pass from the digs to the start at Arabba to Marmolada. The jobsworth policeman at the top of the Pordoi settled our hash though; "No, you stop now, road closed, no journalists, only team cars!" Aye, cheers pal, you'll soon get that job you want in the riot squad, bludgeoning students. Sorry..., I was ranting, wasn't I? 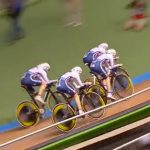 Interviews March 13, 2014
It’s not along since we interviewed Katie Archibald – as a member of the GB team which took the world record for the ladies four kilometre team pursuit at the World Cup in Mexico at the end of last year. We make no apology for speaking to her again – but this time we speak to her as world champion in the discipline. 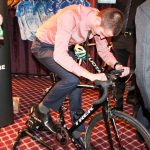 Stories January 19, 2016
We headed to the launch of the recent 2016 Spokes Racing Team, the freezing weather failing to curb the enthusiasm of 120 supporters who had all paid £30 per head to attend the event, held in the Old Manor hotel in Lundin Links, Fife. Spokes team owner owner Craig Greive and director sportiv Blair Whiteside had put together quite an evening with guest speakers including former pro and now DS at One Pro Cycling James McCallum (who's still looking fit), the Lord Provost of Fife and Director at Dunfermline Football Club and quite the celebrity and public speaker, Jim Leishman.